That's Hot: Plaintiffs Allege Burn Hazards, Say They Have the Scorched Hides to Prove It 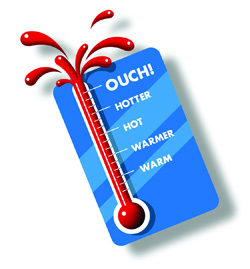 With the onset of winter, it might be nice to get into a summer frame of mind, for a few minutes anyway. Here are some reminders that it can be a dangerous world—and a hot one too, apparently, if some recent lawsuits are any indication.

Folks are finding that there are any number of ways to get singed, if you’re not careful. Some might blame it on global warming, some on carelessness; others might simply say: Stuff happens.

Take, for instance, Texas in the summer—August, to be exact. It’s not all that unusual for temperatures to be north of 100. And surfaces tend to heat up quickly—especially, say, a black surface made of marble.

Jennelle Carrillo of Cleburne attended a preseason scrimmage game in August 2010 at the new Cowboys Stadium, home of the Dallas Cowboys in Arlington. Outside of the stadium on that 100-plus-degree day, Carrillo sat on a black marble bench—reportedly in full-length pants—and claims to have suffered third-degree burns that required hospitalization and skin grafts. Carrillo sued the club and its owner, Jerry Jones, for “negligent acts and omissions” that allegedly caused her pain, mental anguish, disfigurement and loss of earning capacity now and in the future. The suit seeks unspecified damages.

Cowboys attorney Levi McCathern remarked sarcastically to ABC News: “It’s amazing that we are now responsible for the Texas sun.”

Another person who seemed surprised to find out that sun-baked surfaces can get really, really hot is Kurt Gies, who decided to enter a September 2011 competition aboard a cruise ship to determine who could claim the distinction of being the hairiest man on board. (Did people really want to know this?)

Gies said that when he stepped onto the deck of the Carnival Cruise Lines ship to show off his swarthy physique, he suffered severe burns to his feet. In August he sued the cruise line, alleging “serious and permanent scarring, disfigurement and embarrassment.”

Vance Gulliksen, a spokesman for Carnival’s PR department, was quoted as saying video of the event showed that “several guests were barefoot and [did] not exhibit any signs of distress.”

But it’s not just the natural ultraviolet rays that are supposedly doing all the damage out there. Man-made UV rays can leave a person extra crispy just as well as natural ones can.

The tanning industry has come under increasing fire not only for allegedly contributing to a sharp increase in occurrences of melanoma diagnoses, but also for accidental overexposures.

One of the most alarming incidents may have occurred because of a failure to activate an alarm. A lawsuit filed in October 2011 in Multnomah County (Ore.) Circuit Court by tanning customer Rebecca Fitzpatrick alleges that employees of Loving’s Hair Gallery East neglected to set the alarms on the tanning bed and turn it off at the proper time. Fitzpatrick fell asleep in the bed and remained there for about 2½ hours.

Her lawsuit states that she sustained first- and second-degree burns to her entire body, as well as permanent scarring and an increased risk of skin cancer. She is seeking damages of $500,000.

With all of this talk about heat, it’s almost enough to make a person want to run outside and make some snow angels.