Have a $100 million estate to liquidate? Then you might want to talk to this lawyer 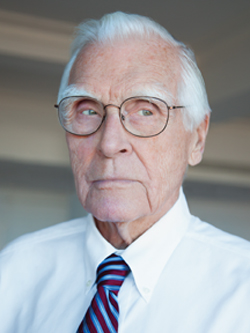 Alexander Forger has had one of those careers that make you wonder: How in the world did he do that?

A World War II veteran and Yale Law School graduate, the 91-year-old probate lawyer has a roster of distinguished clients, including the estates of Jacqueline Kennedy Onassis and the recently departed Rachel "Bunny" Mellon.

After more than 40 years practicing family law at the New York City firm Milbank, Tweed, Hadley & McCloy, Forger retired in 1992 and went on to serve as president of the Legal Services Corp. in Washington, D.C.

We asked him to reflect upon his career and dish about some of those estates.

How did you get started in your career? My education was interrupted by three years in the infantry in World War II. Then there was the GI Bill, and when one is discharged from the Army they give you a "military occupation specialty," and mine was working with machine tools because I had spent my time in the service as a machine gunner. I thought that was not likely a good lifetime career and machine guns were going out of style, so I thought: Well, there's no harm in going to law school.

What did you do after law school? Around 1950, I wandered down to Wall Street and met a fine group of people in the firm Milbank. In law school I was particularly pleased with a course in probate, trusts and estates. Then the partner in charge of that in the law firm was an exceptionally fine person, so I thought: Well, why don't I work in his area?

What about probate law attracted you? I found it to be the most diverse practice of all. You're dealing with individuals mostly concerned with their own issues and you have the ability of getting to know personally the clients and the clients' families.

How did Jackie O and Bunny Mellon come to be your clients? There was an older partner at the firm doing some things for Mrs. Onassis, and he passed that representation along to me back in 1970 or 1971. I became her lawyer and her good friend, I hope, for some 21 or 22 years. Mrs. Mellon? Mrs. Onassis recommended me to her.

What was Jackie O like as a client? From a lawyer's point of view she was a superb client. She was very articulate and understanding of the many issues that she faced. She was just a fascinating personality, and needless to say had many experiences—both happy and sad.

What was Bunny Mellon like? At 103, having had a great career, she had a very full life and no regrets. Mrs. Mellon was a woman with an extraordinarily sharp eye for beauty and nature, conservation, biology, botany and horticulture. She has a horticulture library that now will become an educational institute, and she probably has the finest collection of books, manuscripts and prints on horticulture and garden design. She designed the Rose Garden for President Kennedy.

What constitutes a good will? If it does what it wants to do. It's only the client and maybe the beneficiaries that are concerned with it being good or not good.

What other types of clients have you had over the years? I'm happy to serve a variety of clients, and they weren't all in the high-profile news. They were various achievers in their own rights, whether in finance or the arts. One received an Oscar—Martin "Marty" Richards, for producing the film of the musical Chicago. I had the Johnson family too—the J&J Johnson [family], representing the six children in a will contest. I had another client who was a caretaker for an estate in Long Island. He came from one of the Balkan countries and he learned English and learned about plants and gardens. I forget the reason why he ended up at my doorstep, but he came in and he wanted to do a will, for which he paid in cash $300. He saved his money, invested it and died not wealthy. He left his entire estate to the New York Public Library because he felt indebted to it for the opportunity of learning, reading books and having access to materials that helped him through his life.

Is it true that Mrs. Onassis left you a copy of John F. Kennedy's inaugural address signed by Robert Frost in her estate? Yes. She earlier on had said that she wanted me to have that. To me just the thought was sufficient, but it was a wonderful gesture on her part for which I will be eternally grateful.

What would you have been if not a lawyer? I would have chosen law. I can't think of a better life and a better way to spend your time. It is a great profession—learned, interesting, satisfying, enjoyable. And what else: It provides a wonderful life. And there's more to come. I'm only 91.

This article originally appeared in the January 2015 issue of the ABA Journal with this headline: “The blue blood's lawyer: Have a $100 million estate to liquidate? Then you might want to talk to this lawyer”