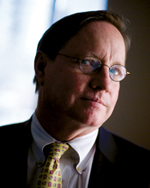 Steve Bell is his law firm’s closer. He’s not a lawyer, but he’s using his 20 years of experience at firms such as PriceWaterhouse­Coopers to close deals with potential clients of his employer, Womble Carlyle Sandridge & Rice.

Bell isn’t the only nonlawyer selling legal services. So what sets this chief of client development and his team of sales directors apart from other business development chairs and marketing directors? They are making rain through their own contacts, getting out of the office and into meetings with chief financial officers and other high-level executives.

“What this game is all about is the relationship business,” Bell says. “The question at hand is how can one more quickly initiate a relation­ship and bring those relationships to fruition.”

Bell’s foray into the legal profession started in 2000 while he was doing product sales at accounting firm Grant Thornton. Looking to market a tax-planning idea to clients at his firm, Bell found a lawyer in North Carolina with the same idea.

Womble Carlyle’s head of client communication at the time, Press Millen, had made a habit of borrowing successful business development ideas from other industries and tailoring them to fit his firm’s needs. Banking and accounting firms had sales directors, so why not a law firm?

Although Bell says he was never a shoo-in for the position, he admits, “When I saw the job description, I said, ‘This was written for me.’ It’s what I’d been building toward my entire career.”

That career now is one of constant attention to op­portunities.

“I always have my Treo with me, all day and all night. First thing in the morning I check for any sales emergencies.” Bell pauses. “I know what you’re thinking: ‘There are sales emergencies?’ ” Bell also has an office phone at his home in the event such an emergency arises.

Typically, Bell’s nonstop day begins at 5:50 a.m., when he spends 20 minutes reading e-mails and “getting a lay of the land” before dropping his kids off at school and heading, first, to his firm’s northern Virginia location, then on to its Washington, D.C., offices later in the day. Waiting for him are requests for proposals to draft, company profiles to prepare and lawyers to be coached.

“I walk the halls and talk to lawyers,” Bell says. “I’m always asking: Did they follow up with that letter, set that appointment; what’s going on; what are they trying to do? A big part of the job is to figure out where are the opportunities.”

He also uses his accounting contacts to set up his own meetings, often being the first point of contact between the firm and a potential client.

Bell is quick to note “there is no nonlawyer selling legal services by him- or herself.” Instead, Bell’s role is to initiate new relationships and to help Womble Carlyle’s lawyers stay in them long enough to bear fruit.

Bell and Millen agree that clients have no problem with a closer in the room. “That’s one of the funny things,“ Millen says. “Clients un­derstood it typically much more readily than the lawyers did. [Other lawyers] thought if you walked into a meeting and said, ‘Hi, here is our sales director,’ a trapdoor opens and you’re cast into a fiery furnace. The clients we deal with all understand and recognize the importance of having one.”

Bell accompanies lawyers to their own client meetings. “I’m a different set of eyes and ears. I’m the one who insists the lawyers not spend so much time talking about their pedigrees, but listen and understand what clients need and want.”

One major difference for Bell between the accounting world and the legal profession is conflicts.“You can’t believe the heart­aches I have had because of conflicts,” he says. “Going well down the pathway of pursuing a nonclient to a client, thinking I have a piece of business, and then the lawyer reminds you to do a confidentiality check.” Bell now works closely with the firm’s chief ethics officer and runs conflicts checks early on in a campaign.

A second adjustment was the switch from the winner-take-all battles among a handful of accounting firms to the case-by-case assignments typical of the legal profession.

“In auditing, one firm walks away with the business,” Bell says. “You had a one-in-six chance of winning. What is very interesting about the legal environment is that legal budgets can be bifurcated, trifurcated. It’s possible for a GC to hire a single lawyer for a matter on a test basis and then expand on a case-by-case basis.”

Bell and his team are paid a salary and get “a shot at an incentive pool.” Though they can’t get commissions for each closing, which could be interpreted as fee-splitting, they are evaluated on the number of deals they develop and their level of participation.

With the struggling economy, “sales of legal services have dried up,” Bell says. As a result, his team, which expanded by one salesperson each year for the past five years, has reached a plateau.

But the legal profession’s first director of sales can’t say he’s worried about the future. “I don’t really think about the future much,” Bell says. “I come to work every day and I work as hard as I can. It’s a new ballgame every day.”