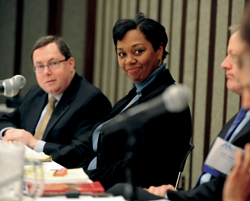 In these days of crisis, a foreclosure takes place every 13 seconds in the U.S. So, doing the math, that means more than 400 foreclosures were initiated somewhere in the nation during the 90-minute program “Foreclosing on the American Dream” at the midyear meeting.

And while there’s a sense of urgency to address the problem, a re­sponse by policymakers and lawyers practicing in the field remains a work in progress, according to speakers at the program sponsored by the ABA Commission on Homelessness and Poverty. Meanwhile, the mounting numbers of foreclosures around the country are having a domino effect on other issues.

In Massachusetts, for instance, condominium foreclosures outnumber those of single-family houses, triggering problems for owners of nearby units and condo associations, said Kurt James, direc­­tor of Rackemann, Sawyer & Brewster in Boston.

Foreclosures also are threatening tenants of rental properties, said Jeremy Rosen, executive director of the National Policy and Advo­ca­cy Council on Homelessness, which is headquartered in Washing­ton, D.C.

And in some areas, foreclosures are dragging down entire neighborhoods, said Stephanie M.M. Smith, a community development policy analyst in Garden City, N.Y. “Neighbor­hoods are being demolished and vacated—not just because one homeowner moves out, but because the neighbors are moving, too,” Smith said.

State and federal efforts to help property owners have had limited success. Panelists pointed to the Federal Hous­ing Admini­stration’s Hope for Home­owners program, approved by Congress in 2008, as an example of futility.

The program “is a poster child for what not to do,” Rosen said. The program, designed to help homeowners at risk of foreclosure to refinance into more favorable mortgages, contains a long list of criteria that make it difficult to qualify. As a result, few homeowners can participate.

SLOW DOWN FOR NEW HURDLES

Rosen said the Obama administration is planning a new homeowner assistance program with $50 billion in funding from last year’s Troubled Asset Relief Program. Meanwhile, many lawyers are scrambling to adjust on the run to new legislation and assistance programs along with court decisions that are changing the landscape of real estate law.

“Consider all sorts of options with your client,” said Anand. “No two situations are alike. Look at the lender agreement and try to negotiate a resolution that is short of foreclosure. In the end, it’s a business decision being made by the banks.”

But as rapidly as real estate law is changing right now, it’s also “déjà vu all over again,” James cautioned. “It is cyclical,” he said. “Eventually, things return to the status quo ante, and you sort of forget what you went through—until the next downturn.”