The Power of Plain Talk 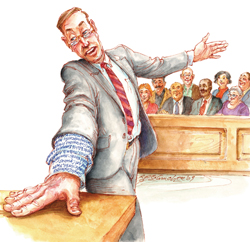 Wednesday evening’s bar association program with Angus and Judge Standwell was on effective oral communication. The room was packed well before 7:30, and when Angus and the judge walked in, law professor Vince Warbler marched up to the front and offered to join the program.

When Angus and Judge Standwell politely refused his offer, Professor Warbler grabbed the microphone and announced that since he was planning a new course at the law school called “The Art and Skill of Persuasive Written and Verbal Legal Communication,” he would be happy to answer any questions we might want to direct to him.

When a number of voices called out “Sit down!” Angus took the microphone back and said, “Thank you for your kind offer, professor, but I think we’d better proceed with the scheduled program.

“We start with federal district Judge Horatio Standwell, whose job includes being on the receiving end of all sorts of lawyers’ verbal communications.”

The judge stood up and said, “As many of you know, I always ask the lawyers in every case for oral argument on important motions because the verbal give and take of counsel is often the most efficient way to get to the heart of the dispute.

“Even though it helps, I am always struck with the confusing verbal clutter that most lawyers use talking to each other, the judge, the witnesses and even the juries. I’m going to share some examples of those tangles with you this evening.

“And as you’ll notice, it’s not so much the particular words that make legalese incomprehensible as it is how simple words can be put together in such strange ways. Here we go:

“ ‘Would you indicate please, for the benefit of the judge and jury, what you did in response to the petitioner’s request that you ameliorate the conditions created by your company’s failure to make timely delivery of the automatic current interrupters?’

“Sound like a lawyer?” said Judge Standwell. “You bet. But was it legal terminology? There were two words you can find in Black’s Law Dictionary: petitioner and ameliorate. But they’re not what made this sentence approach zero on the ‘Kelvin Scale of Comprehensibility.’

“ ‘Directing your attention to the 23rd of May, did you have occasion to discuss the terms of the agreement that would apply in the event of noncompliance on the part of the petitioner in this cause of action concerning its obligations to the respondents?’

“Any legal terms?” said the judge. “Sure. Petitioner is in my legal dictionary, but noncompliance isn’t. The question is, sound like a lawyer? Embarrassingly so.

“ ‘Regarding your negotiations with the manufacturers of the interface connectors your organization planned to install in your credit card cell phones, what, if anything, were you told as to availability required to meet your marketing commitments for fiscal year 2010?’ ”

“My question for all of you,” said Standwell, “is what is it about these questions that makes them so difficult to understand?”

In the pause that followed, you could tell that people were trying to put their fingers on what causes incomprehensibility. I was sitting in the back, and I noticed that Professor Warbler didn’t raise his hand. Maybe it was because he always talks like the lawyers who ask the kinds of questions that Judge Standwell described.

Then someone in the second row said, “The words were all individually understandable, but the questions were too long.”

From the back came, “It’s not that the questions were too long, it’s that they were too hard to follow.”

“But why were they too hard to follow?” said Judge Standwell.

“They seemed to be asking for useful information,” said someone near the door.

“But they were all far too tangled,” countered someone on the other side.

“They all seemed like legalese,” said someone down front, “but hardly any words were what you would call legal terms.”

“Interesting,” said Standwell with a smile. “Maybe it’s time to hear from Angus.”

“Musing over how we got the way we are,” Angus said, “I remembered my first day in law school.

“The class was Torts. The teacher was ‘Boomerang’ Billy Reynolds, the terror of all the first-year students. He called on Janet Winslow—the person sitting next to me—to state the first case. She stumbled around for what seemed like forever, finally ending with, ‘I don’t think what happened in this case was sueable. The judge who wrote this opinion was trying to say this was a problem you couldn’t take to court.’

“Boomerang Billy roared at her, ‘Ms. Winslow, if you can’t properly state the case or its holding, at least sound like a lawyer!’

“Thus,” threw in Judge Standwell, “does the serpent of obfuscation slither into the Eden of communication. We were all told to sound like lawyers. And our only models were law professors. Not just lawyers, but academics who were skilled at firing out difficult hypothetical questions and challenging students to state how the law might or might not apply to the situation.

“They were great mentors for teaching critical thought, but not for expressing difficult ideas simply and understandably.”

“Exactly,” said Angus. “We used to stand on the front steps of the law school between classes, arguing what that day’s cases were about. We were practicing talking like lawyers. But we never practiced explaining anything to clients or nonlawyer audiences.”

“So law schools supply both the best and the worst of what the practice of law is all about,” said Judge Standwell. “How to spot all the legal issues in a case, but not how to speak simply and clearly to judges, juries, clients, witnesses and other ‘real people.’ ”

“Which is,” said Angus, “our most important job.”

While that idea was sinking in, everyone could hear Professor Warbler snort “Humbug!” as he stomped out of the room. That was too bad, because he missed this handout that was written by Angus and the judge:

First, speak in simple sentences. Compound and complex sentences invite confusion. One idea at a time is enough.

Second, use simple words. You want everything you say to command instant understanding.

Third, facts, not opinions, have the power to convince others.

Words to Avoid in Legal Arguments

Manifestly: Fancy talk meaning “plainly” or “obviously,” which are words you shouldn’t use in arguments anyway. If something really is obvious, you don’t need to say so.

Egregious: It means “outrageous” or “outstandingly bad.” But if something is really that bad, you shouldn’t have to tell people that. Egregious is a pompous word. Don’t use it.

Submit, argue, contend and maintain: These words say “Here is the position I’m taking”—which implies that you are not necessarily asserting it’s true. So only use them when talking about what the other side has said, not what you’re about to say.

Words to Avoid in Examining Witnesses

Prior and subsequent: “Before” and “after” are perfectly good words. Use them instead.

Previous: Worse than “prior.”

Contemporaneously: Worse than “previous.” “At the same time” is understood instantly.

Have occasion to: Needless clutter that often follows “Did you … ?” Don’t use it.

With respect to: An awkward way to say “about” or “concerning.”

In question: A phrase we use when we can’t remember a name, date, place or some other detail. It sends the subliminal message that you don’t know the facts very well.

Initiate: “Start” is a perfectly good word. Use it instead.

Let me ask you this question: Verbal clutter. You don’t need the witness’s permission to ask questions. That’s your job.

Observe and perceive: “See” and “hear” almost always do a better job.

It is true, is it not, that: Needless clutter at the start of questions. But the single word “True?” is a great verbal prod to a witness who doesn’t respond to one of your questions on cross-examination.

Indicate: “Show” and “tell” are better words. Use one of them instead.

Relate: Too fancy. “Tell” does a much better job.