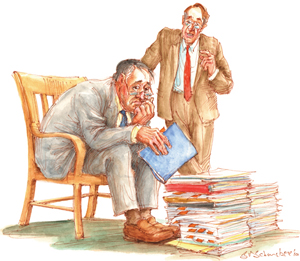 Angus said, “What’s the point of this brief? What’s your big idea?”

“What do you mean, ‘What’s the point?’ ” said Michael Marquard.

“It’s to get the court of appeals to reverse the lower court’s decision. We got our head handed to us on a platter by the jury, and the object is to get a new trial. I should have thought that would be obvious.”

“What you want is clear enough,” said Angus. “But I’m afraid your big idea is not.”

Angus was holding his second session at Randolph and Wheeler in a course on professional communication —effective writing and speaking—and Marquard was one of the firm’s new lawyers taking the course.

“I don’t know what strange philosophical point you’re looking for,” said Marquard, “but this case is hardly the right platform for trying to entertain a handful of second-rate jurists with ersatz jurisprudential insights.

“This kind of brief writing is like chopping wood. The case came out the wrong way at trial. My job is simply to find the judge’s mistakes and explain them to the court of appeals.”

“You’ve got it,” said Marquard.

“And other than that, you don’t have anything to say.”

“Which is exactly my point,” said Angus. “Whether you’re talking or writing, the first key to persuasive communication is to have something to say. Something worth saying.

“That’s your big idea. Whether you say it directly or indirectly, whether you make it implicit or explicit, whether you put it up front and out loud or make it subtle and intriguing, your message should drive everything you do.

“One way or another, your big idea is the force behind word choice, organization, intensity, tone, length of sentences, punctuation, the size of paragraphs—everything.”

“But I have a big idea,” said Marquard. “It’s ‘Here are the mistakes the trial court made. Fix them by giving us another trial.’ ”

“It’s an idea, all right,” said Angus. “The problem is, it’s not big enough. It has all the persuasive power of ‘My engine is making a funny noise when I put the car in reverse. Could you check it out to see if there’s anything wrong?’ ”

“I didn’t say better,” said Angus. “I said bigger. The big idea behind most persuasive writing and speaking is the moral imperative. The wrong that cries out to be set right or that has to be prevented.”

“My brief has a moral imperative,” said Marquard. “The judge made a lot of mistaken evidence rulings. That’s what cries out.”

“Does it?” said Angus. “Is every mistake an injustice? Is the only fair trial a perfect trial? If that’s the case, there’s never been a fair trial.

“Your problem is, there’s too big a jump between some mistaken evidence rulings and an unfair trial. Like they say in New York City, ‘A dozen evidence errors and $5 will buy you a pastrami sandwich.’ ”

“So how many bad evidence rulings does it take?” said Marquard.

“It’s not the number,” said Angus. “It’s what they do to the trial. One bad egg can spoil the whole bowl of nog. You can’t just catalog a bunch of evidence rulings and argue that the judge was wrong when she thought something was hearsay or decided that something was improper impeachment of a witness when it was actually relevant for some other purpose.

“Your brief on the judge’s evidence mistakes has got to weave together two stories. First is the story of the case—what happened between the parties that brought them to court. The second is how the trial judge’s improper rulings changed the story—how they spoiled the bowl of nog.”

“You mean it’s not just trim and polish—I’ve got to start this all over again?” said Marquard.

“Put it another way,” said Angus. “Do you want to keep on chopping wood or become creative?”

MAKE IT A GOOD STORY

“OK,” said Angus. “Tell you what you do. Don’t throw out what you’ve already written. It does a good job of sorting through Judge Sarah Sudlow’s bad rul-ings. Use it as a reference tool when you weave the two stories together that show why the case ought to be reversed.

“But before you start writing, tell me the story. And remember how to do it. You’re not a lawyer anymore, so you’re not playing the lawyer game or using lawyer language. You’re just a regular person telling a story.”

“For years, Peter Keller and Marshall Claxton were partners who ran a party center and catering business. They got along OK and did pretty well. But then PartyParty—a new national chain of party centers and caterers—opened one of its outlets in town and started competing with the Claxton & Keller Party Center.

“Within months, Claxton & Keller was hemorrhaging money and the partnership started falling apart. Claxton was in charge of the books, but even though both of them cut by half the amount they drew out of the business each month, Claxton was never short of cash while Keller was always strapped for funds. And when Keller found out that Claxton was regularly playing tennis with Sheila LeClerq, the owner of the new PartyParty franchise, he hired a private investigator.

“The lawsuit was Keller v. Claxton and LeClerq, and it charged them with all kinds of things, including breach of contract, wrongful interference with a contract, unfair trade practices and good old-fashioned fraud.

“We represented Keller, and our theory was that Claxton and LeClerq cooked up a scheme to ruin the Claxton & Keller Party Center so that PartyParty would not have any real competition. They did it with an ingenious variety of little tricks, like having Claxton & Keller serve wine punch at the annual party of the Woman’s Christian Temperance Union and slipping sliced pepperoni into the salad for the Great Earth Vegetarian Association’s luncheon.

“And they also used genuine sabotage. The heat went out in the winter, the air conditioning failed in the summer, the sound system quit in the middle of speeches, the electric power just stopped during wedding receptions and bar mitzvahs.

“Virtually everything was somehow tied to LeClerq’s cousin, Marty Drewek, who mysteriously disappeared right after Claxton & Keller went bankrupt and hasn’t been located since.

“Of course, showing the connection between Drewek and all the things that killed the Claxton & Keller Party Center was the heart of the case.

“Here’s how Judge Sudlow took sides: First, even though the saboteur, Drewek, was LeClerq’s cousin—and even though he had been on the PartyParty payroll—Judge Sudlow wouldn’t let us prove any of the things he did unless we had some evidence that LeClerq had actually authorized it. That, of course, was impossible. There are lots of times when the only way you can establish some facts is with circumstantial evidence.

“Second, Sudlow wouldn’t let us introduce evidence that Claxton and LeClerq—both of whom are married to other people—took three long weekend trips to-gether to places like Cancun, Acapulco and Las Vegas while the Claxton & Keller Party Center was busy falling apart.

“She thought it was just evidence of naughty behavior between two people that couldn’t be used to attack their credibility if they testified as witnesses in the trial. She never understood those trips showed a lethal combination of motive, intent, opportunity, a common plan and preparation—all reasons that make bad acts admissible in evidence.

“So that’s it. Two wrong ideas led to lots of rulings that eviscerated—literally gutted—our case.”

It was Angus’ turn to smile.

“Michael,” he said, “start writing. Somehow I think you’ve got the big idea.”

The ABA Journal is occasionally reprinting some of Jim McElhaney’s most popular columns from past years. This article originally appeared in the Journal’s February 2002 issue under the headline “You and Your Big Idea.”