Time to Make a Move 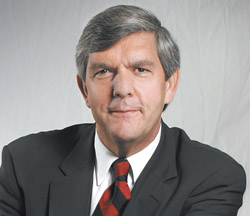 Aug. 7, 2006, was a triumphal day for Michael S. Greco. Just hours be fore ending his term as ABA president, Greco watched the association’s House of Delegates vote unanimously to urge governments at the federal, state and territorial levels to assure that poor people have access to legal counsel at public expense as a matter of right in civil cases “where basic human needs are at stake, such as those involving shelter, sustenance, safety, health or child custody.”

The policy was developed by a task force that Greco, a longtime advocate for improving legal services to the poor, had appointed a year earlier at the start of his term. The policy, Greco said, expresses the principle “that every poor American, like every wealthy American, should have access to a lawyer to protect the fundamental needs of human existence.”

Others have compared the policy’s potential impact to the U.S. Supreme Court’s 1963 ruling in Gideon v. Wainwright that counsel must be provided for indigent defendants who are facing serious criminal charges in state court proceedings.

After that high point, however, efforts to put the policy into effect have sputtered. To date, no state legislature or court has acted to recognize a sweeping right to legal counsel in civil cases where essential needs are at stake.

And in the current recessionary climate, proposals that states commit funding to guarantee counsel in civil cases—even to protect the rights of poor people—are not an easy sell.

But those same recessionary pressures also appear to be widening the gap in the unmet civil legal needs of low-income people. On the basis of poverty rates reported by the U.S. Census Bureau, nearly 57 million Americans—the highest number ever—now qualify for legal assistance programs, estimates the Legal Services Corp., which supports local programs with funding approved by Congress. Other studies estimate that legal aid offices and pro bono efforts by private lawyers meet only about 20 percent of the civil legal needs of poor Americans.

Despite the challenging current environment—or perhaps because of it—some real movement has begun toward implementing the “civil Gideon” principle that low-income citizens are entitled to publicly funded legal counsel in civil cases where vital needs are at stake. At least 14 states have begun to look at how programs might be implemented.

And in August, the ABA House of Delegates adopted two measures that together provide a road map for creating programs that would make state-funded legal counsel available to qualifying low-income people.

Under the ABA Model Access Act (PDF) adopted by the House, legislation would create a state access board to administer a public fund to support legal services, and coordinate efforts with existing legal aid organizations and pro bono programs. The act also defines the “basic human needs” and income levels that would qualify individuals for publicly funded legal services. Meanwhile, the ABA Basic Prinicples of a Right to Counsel in Civil Legal Proceedings (PDF) identify key elements that should be incorporated into programs in this area.

Both measures were drafted by the ABA Working Group on Civil Right to Counsel chaired by Greco, a partner at K&L Gates in Boston. The primary sponsors in the House were the Section of Litigation and the Standing Committee on Legal Aid and Indigent Defendants.

The ABA measures are an important contribution to the growing discussion about civil Gideon, says Debra Gardner, legal director at the Public Justice Center in Baltimore, who also serves as coordinator of the National Coalition for a Civil Right to Counsel. The model act, for example, “is utilitarian in an extremely helpful way,” she says. In 1963, she notes, “there was chaos at the state level on how to implement Gideon.”

Greco says there was no point in putting off action on the issue. “Some people during the past year were urging us to wait,” he says. “But why delay, and for how long?”