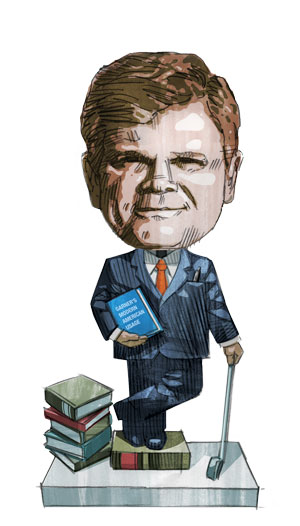 Last month, I divulged as many trade secrets of the U.S. Office of the Solicitor General as I reasonably could in one column. Now for more.

Remember that SG briefs are the gold standard for point headings: full-sentence headings set in downstyle (no initial capitals) so that the table of contents reveals the essence of the argument at a glance.

All arguments over the interpretation of a legal instrument are ideally organized in four parts: text, structure, purpose and history.

There are variations, to be sure, but this basic protocol appeals to all sorts of judges. You see, every judge is a textualist—to one degree or another. All say: “We begin with the words of the text.” So should the advocate who argues about the meaning of a statute, ordinance, rule, will, contract, patent or other legal document. Begin with the words of the provision at issue. Then try to find a whole-text reading by which the structure reinforces the wording. Then reinforce that with the purpose of the provision—or purpose of the document as a whole. Then proceed to legislative history or (if you can) parol evidence. But remember that in ideal circumstances, drafting history always comes last—never first.

Because this progression of argument mirrors the techniques of American courts, the Solicitor General’s Office has all but enshrined the approach in its brief writing. The progression goes from particular to general, from most pertinent to least and from strongest to weakest. You’ll see small variations on this approach again and again in first-rate brief writing.

In the U.S. Supreme Court, the embryonic form of this progression from text to history began with opinions by Justice Robert H. Jackson, who focused on text and history. Justice William J. Brennan Jr. used a words-purpose-history analysis, and a few years later Justice Lewis F. Powell Jr. developed the language-structure-history litany. Justices William H. Rehnquist, John Paul Stevens, Ruth Bader Ginsburg and David H. Souter have elaborated variations on the theme—the fullest and best version having first appeared in an opinion by Justice Souter. The point is that justices of all persuasions have embraced this mode of analysis. Even Justice Antonin Scalia, hardly a fan of the practice, says that advocates must argue legislative history.

Click here to view a PDF of two sample tables of contents by the solicitor general.

But note an important point about “history” in this paradigm. In statutory construction, it embraces both statutory history (the enactment history and amendment history of a statute) and legislative history (floor speeches and committee reports leading up to enactment). Of the two, statutory history is the less controversial and therefore the more persuasive; but both, for the time being at least, are pretty widely relied on by American courts.

In the interpretation of a written contract, the term history embraces the circumstances and context surrounding the agreement’s making and the parties’ choice of words. The parol-evidence rule generally bars evidence of any prior or contemporaneous oral agreement to change, contradict or supplement an integrated contract’s terms. But when parties disagree about the meaning of the words they used—despite apparent clarity—and assert differing, reasonable interpretations, a court may essentially disregard the parol-evidence rule to the extent necessary to determine what the parties intended the words to mean when they agreed on them and whether the plain language of a contract actually is clear, complete and unambiguous.

For both statutes and contracts, if you have a sound textual argument, you’ll want to bolster it with an astute linguistic analysis—perhaps grammatical, perhaps semantic, perhaps punctuational.

Occasionally, purpose and history are transposed if the latter is significantly stronger than the former.

In the examples (PDF) at the top of this page, you’ll see in two tables of contents how the solicitor general has approached organization in point headings. They should provide a sound template for your own arrangement of arguments hinging on legal interpretation.

So there: The secret is out.

This article originally appeared in the October 2015 issue of the ABA Journal with this headline: “Making Your Point: Tips on organizing your table of contents for statutory and contractual interpretations.”

Bryan A. Garner is the president of LawProse Inc. and a law professor at Southern Methodist University. He is the author of The Redbook: A Manual on Legal Style and the author of Legal Writing in Plain English. Follow Bryan Garner on Twitter @BryanAGarner.