Alas, Poor Atticus! Trials are supposed to be all about winning 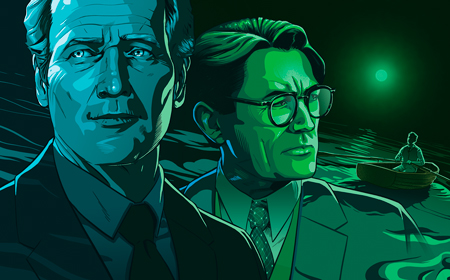 President Donald Trump’s winning story, his throughline during his campaign, was easily reduced to a slogan: “Make America great again.” The slogan calls up imagery about America, about our patriotic sense of American exceptionalism and the feelings of nostos—the longing for a nostalgic emotional return to a mythic time and place located somewhere within our past.

The slogan has a second implicit narrative component. It is about how we make America great again. Trump calls forth familiar storylines about defeating adversaries, fighting our way back, overcoming obstacles and achieving our goals victoriously. These themes have resonance in the collective American psyche and in our popular culture (think, obviously, of Rocky or any John Wayne/John Ford Western). Nor is Trump the first politician to draw upon the popular story.

But crucial pieces are missing from Trump’s narrative: Unlike the popular Western, this political variant does not specify the identity of a singular villain. Of equal importance, the story only promises future victory; it does not end in victory itself. Indeed, seeking victory in wealth, status or power is a perpetual, never-ending quest.

Most important, in the classic American Western, the protagonist’s character is forged by the struggle against evil—heroism is ultimately measured by a character’s willingness to sacrifice themselves to preserve community in a dangerous and lawless territory.

I do not denigrate the power and effectiveness of Trump’s narrative throughline. The fact that it is obvious, shrewdly repetitive and reducible to a sound bite increases rather than diminishes its power. The emotional core, simply put, is that the American story is all about winning. As any litigator knows, this storyline is profoundly relevant to tales about litigation in literature, popular culture and the courtroom, as well.

How does the story end?

Here’s an anecdotal litigation story: The not-so-young associate argues a major appellate matter before the state supreme court. He has spent infinite hours researching a complex testamentary case and endless hours writing the brief, strategizing all the possible legal and factual arguments. The substantive issues do not matter so much here.

But this is an impossibly complex case, factually and legally, that would make Charles Dickens’ head spin and make Jarndyce v. Jarndyce pale by comparison. It also is a big-money case in an all-or-nothing situation as to who will walk away with a multimillion-dollar estate. At oral argument, the bench is hot and the justices seem fully engaged, especially the usually circumspect chief justice. With his wizened senior partner sitting courtside, the associate gives it his all.

After the argument is over, the associate asks the senior partner: “So, how did I do?” The partner says, “It’s too early to tell.” He’s right, too. In litigation practice, the ending of the story—the winning or losing—provides the meaning of the tale. Litigation stories, as in sports or American politics, are all about winning.

Likewise in American pop culture, including in our American literary tradition, we love our winners. And we typically have less tolerance for, or interest in, our losers. Ernest Hemingway’s novels are all about winning. His heroes might ultimately die, but first they achieve gloriously self-defining victories: They’ll blow up the bridge, kill the charging rhino or land the impossibly large fish before they go under. And the hero reveals their heroic and self-sacrificing character during the struggle.

F. Scott Fitzgerald, however, told stories about romantic losers. Gatsby, for example, never pries Daisy away from Tom. Even Dick Diver loses Nicole before he retreats into American obscurity in Tender Is the Night. Fitzgerald’s heroes come up short of their dreams; his stories are about romantic aspiration, not outcomes or achievement.

It is not coincidental that Hemingway sustained his popularity throughout his long career. But after the self-indulgent Roaring ’20s were over, Fitzgerald’s popularity as a chronicler of his time took a dive. The Great Gatsby, Fitzgerald’s enduring novel, never sold in his own time. The point: Hemingway’s and Fitzgerald’s popularity in their own time had much to do with the nature of the stories they told—and Americans generally prefer stories about winning.