The film Adaptation, directed by Spike Jonze and written by Charlie Kaufman, is particularly relevant for lawyers struggling with telling stories effectively both inside and outside the courtroom.

So here is a brief distillation of the theme of Kaufman’s/Jonze’s marvelously convoluted comedy:

A partially successful “commercial” screenwriter named Charlie Kaufman struggles to “adapt” New Yorker writer Susan Orlean’s nonfiction book The Orchid Thief. The book is based upon Orlean’s New Yorker articles about orchid thief John Larouche, who operates in the Fakahatchee swamp of the Florida Everglades. The book is a collection of meticulously observed pieces about flowers and, specifically, one flower-lover’s obsession with orchids.

Orlean’s The Orchid Thief lacks a propulsive narrative core. There is no “plot”—no compelling causal relationship between “events” shaped by human agency that builds to an explosive and emotionally satisfying climax. Orlean’s story drifts in disconnected and episodic pieces—it unfolds just like the flowers. Kaufman suffers from a severe writer’s block as he struggles to adapt The Orchid Thief into a commercial movie.

To remedy his writer’s block, Kaufman ventures to New York City and attends screenwriting guru Robert McKee’s three-day storytelling workshop. There, McKee reveals the secret sauce of successful Hollywood movie making: Stories must be adapted using compelling and dramatic plot structures. The “big” Hollywood climax is especially important, as it provides a lasting emotional wallop that can sometimes fill in holes in dramatic logic and “save” even a mediocre movie.

So, what’s the point for lawyers?

Adaptation offers a lesson on how seemingly unstructured narratives can take form. It also provides a timely and ironic meditation on the struggle all lawyers face when repackaging “reality” into stories, especially into courtroom litigation stories.

All persuasive stories—including the stories lawyers tell—are never merely artless or formless representations of past-tense “facts.” As the title of a popular CLE/National Institute for Trial Advocacy manual announced, Facts Can’t Speak For Themselves.

Renowned trial lawyer Gerry Spence puts it this way: “It appears that the evidence is weighed in terms of a good story, and not the other way around … The evidence sends me looking for a good story with which to support it, but the evidence does not create the story on its own.”

Years ago, like Charlie Kaufman, I attended Robert McKee’s storytelling course in New York City. Like many lawyers, I hoped to convert experiences from law practice into a screenplay I could sell to Hollywood.

McKee’s course emphasized “plotting” and how to create effective narrative structure that sustains the attention of the audience in all “commercial” storytelling, including lawyers’ storytelling practice. I was especially absorbed by McKee’s scene-by-scene analyses of the plot-structures in classic Hollywood movies. 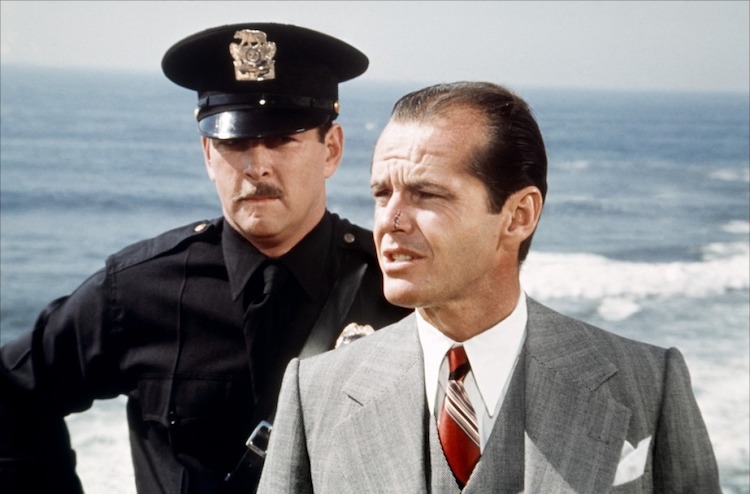 For example, McKee closely analyzed writer Robert Towne’s screenplay for Chinatown. One of McKee’s takeaways for lawyers was about the effective depiction of villains and villainy in courtroom melodrama.

McKee identifies the “value-at-stake” in Chinatown as justice, itself: The detective-protagonist struggles to solve the mystery, defeat the villain and obtain justice. To make the plot work, the “forces of antagonism” (villainy) opposing the will of the protagonist must grow exponentially stronger as the movie progresses, moving from wrongdoing to criminality and murder to systemic corruption, and then finally morphing into tyranny revealed in the dark ending. Here, Jake, the detective is defeated, the villain gets away with murder and an overwhelming and pervasive tyranny is captured in Chinatown’s unforgettable line: “Forget it, Jake. It’s Chinatown.”

Spence’s closing argument in The Estate of Silkwood v. Kerr-McGee

In my book, Storytelling for Lawyers, I analyze how a variation on this progression is developed by many plaintiffs’ lawyers in litigation tort-stories, calling for the fact-finder to solve a mystery based upon the evidence, defeating the “forces of antagonism” and redeeming the value of justice by returning a verdict for the plaintiff. As an illustration, I provide a close, McKee-like reading of Spence’s famous cinematic closing argument on behalf of Karen Silkwood in The Estate of Silkwood v. Kerr-McGee.

The backstory: Karen Silkwood, a lab analyst at Kerr-McGee’s Cimarron nuclear facility in Oklahoma, whose job was to grind and polish plutonium pins used to manufacture fuel rods for nuclear power plants, was contaminated with radioactive materials. A union representative, she had previously complained about conditions at the plant and was allegedly documenting Kerr-McGee’s safety infractions. She was killed in a mysterious, one-car accident the day before a meeting with a New York Times reporter about safety conditions at the plant. Her apartment was quarantined and all her personal property inside was buried in a nuclear waste site.

Spence sued Kerr-McGee for Silkwood’s pain and suffering, resulting from the exposure and for property loss and punitive damages. Spence cleverly retrofitted the evidence into a suspenseful plot that later provided the structural bones of Mike Nichol’s award-winning movie Silkwood. 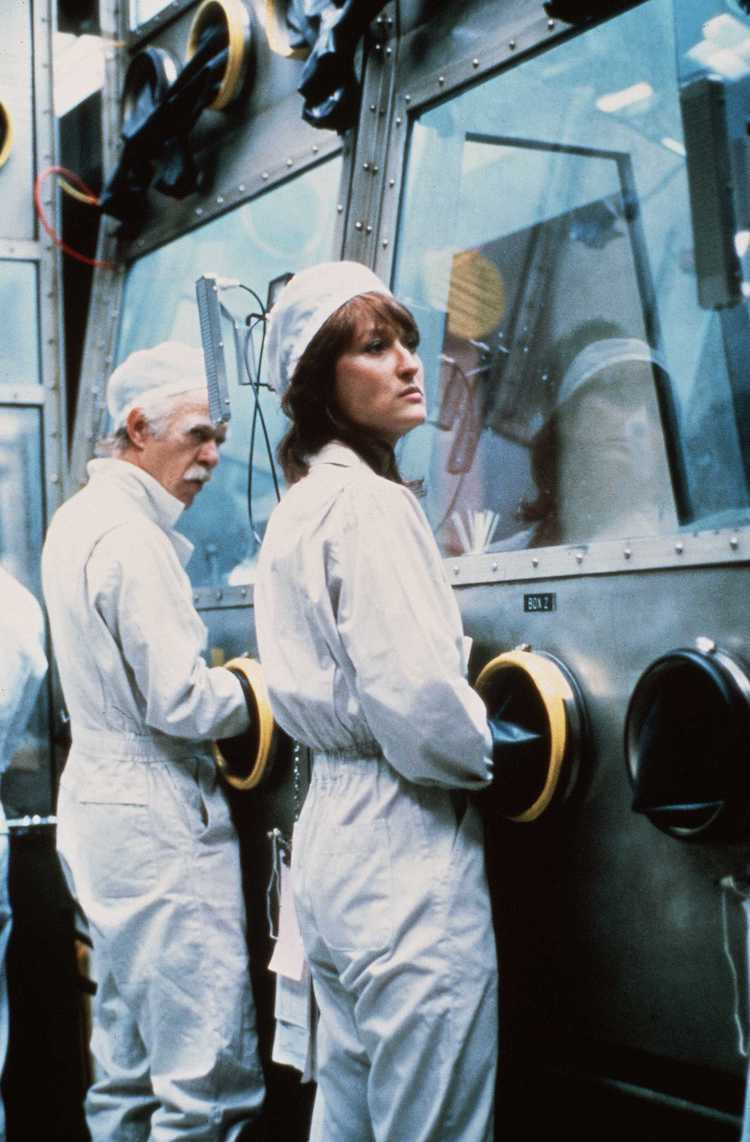 Meryl Streep in the 1983 movie Silkwood. Image from MovieStillsDB.

In the plot of Spence’s trial story and closing argument, the jurors are cast in the roles of detectives as they watch the trial unfold like a movie, revisiting the struggle between the virtuous protagonist Silkwood and villainous corporation Kerr-McGee. Silkwood battles the “force of antagonism” aligned against her, valiantly attempting to obtain justice for the other workers at the plant. As in McKee’s paradigm, Kerr-McGee’s villainy grows ever more powerful as the trial progresses. In his closing argument, Spence empowers and calls upon the heroic jury to answer three riddles in their deliberations, solving the Silkwood mystery and providing justice in the end:

Unlike in Chinatown, Spence proposes a positive and uplifting ending to his story, and the heroic jury comes through: It punishes the corporate villain and preserves the value of justice by returning a plaintiff’s verdict for Silkwood, awarding $10 million in punitive damages against defendant Kerr-McGee.

For lawyers unable to attend a McKee workshop, I recommend his book, Story: Substance, Structure, Style, and the Principles of Screenwriting.

McKee distills complex narrative theory into clear-headed explanations, suggesting conceptual tools to add to any litigator’s toolkit—supplementing what lawyers may already know intuitively from their storytelling practice. McKee’s book is also a repository of movie plots akin to lawyers’ brief banks. These templates suggest ready-made plots that work and techniques for “adapting” evidence into compelling stories.

McKee’s insights are especially helpful to lawyers attempting to construct their own litigation stories and for deconstructing the competing stories told by courtroom adversaries.

We are all immersed in an endless sea of stories. As educational psychologist Jerome Bruner (Actual Minds, Possible Worlds) and Nobel-winning behavioral economist Daniel Kahnemann (Thinking, Fast and Slow) have revealed, we reconstruct our world through the stories we tell others and tell ourselves.

To pretend that legal decision-makers are immune to the seduction of well-told stories or that litigation practice turns exclusively upon evidence presented analytically misconceives the nature of the battle of competing stories in the courtroom. And in this storytelling competition, successful lawyers inevitably draw upon recurring plots from other stories, including stories borrowed from pop culture and the movies.

What Robert McKee does remarkably well is to provide an engaging refresher course for better understanding basic “principles” of the storytelling craft. These tools do not replace, but rather supplement, the analytical tools and vocabulary already in most lawyers’ toolkits and may suggest a rejuvenating approach to litigation practice.