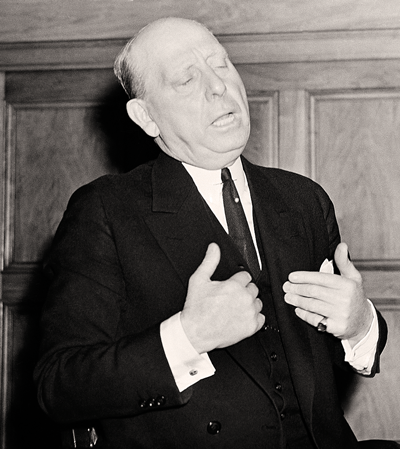 For three decades, Frank Hague was more than simply the mayor of Jersey City, New Jersey. In the ferocious politics of the Garden State, he headed the Democratic Party machine—a power broker, a kingmaker, a boss.

Born to Irish Catholic immigrants in a city ruled by Protestants, Hague nonetheless rose quickly through the party ranks. The Irish and Italians had long been gerrymandered to an area of the city known as the Horseshoe. But by embracing the image of progressive reform championed by Gov. Woodrow Wilson, Hague was able to transform immigrant estrangement into personal political power.

As the commissioner of public safety, Hague sacked scores of corrupt cops and set higher pay and standards for new hires. But he also hired cronies from the Horseshoe. Known as “the Zeppelins,” these hand-picked officers formed a cadre of enforcers who ensured Hague’s reforms, often by extralegal means.

He cleaned up the brothels, rousted vagrants and cultivated a reputation for official violence that helped make Jersey City what he unartfully proclaimed “the most moralest city in the country.”

Elected mayor in 1917, Hague ruled with a complex blend of lawlessness and Catholic largesse. He welcomed women into the ranks of voters but kept them out of bars. He commanded state funding for new schools and a vast public medical center. He provided voters with food baskets and jobs—and political enemies with an occasional beating.

But there were rumors of kickbacks, gambling payoffs, silent interests in real estate deals and bank accounts infused by couriers with cases of cash—seemingly confirmed by an opulent lifestyle. When a city official questioned his intervention in a court case in 1937, Hague blurted: “I am the law!”

A titular progressive, Hague had railed against large corporations but never warmed to labor unions. A 1924 city ordinance, aimed at union organizers, forbade virtually any kind of pamphleteering.

Hague’s hand grew even heavier in the grip of the Great Depression, as he courted industrial relocation to Jersey City with a “no strike zone.” In April 1930, a new ordinance prohibited “public parades or public assembly in or upon the public streets, highways, public parks or public buildings” without a city permit, with the understanding there would be none.

In 1937, a clash between competing union groups—the American Federation of Labor and the Congress of Industrial Organizations—forced Hague to take sides. He considered the upstart CIO to be communist and threw his power behind the AFL.

On Hague’s order, police disrupted pickets, seized pamphlets and pressured meeting halls not to rent space to the CIO. The Zeppelins patrolled ferry arrivals, “deporting” anyone who wore a CIO badge back to New York City. When the prominent Socialist Norman Thomas sued over his own deportation, a state judge expressed typical contempt, saying Thomas “has no more right to speak in public places … than he has to invade a citizen’s home without invitation.”

In Hague v. CIO, decided on June 5, 1939, the mayor argued that by pre-empting union activism, he was preventing “riots, disturbances or disorderly assemblage.”

In a plurality decision, the justices disagreed: The right to free speech in a public space is subject to some regulation. It is subject to public convenience, as well as peace and good order. “But it must not, in the guise of regulation, be abridged or denied.” Both Jersey City ordinances were declared void.