Wanna Buy Some Boots? Online Counterfeiters Get the Message--Don't Mess with These Brands 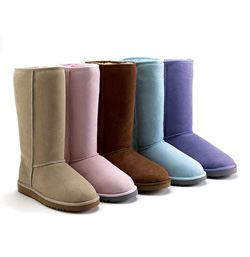 Thanks to the Internet, the days of buying counterfeit products at seedy flea markets and obscure discount stores are long over. Now, with the click of a mouse, consumers—unsuspecting or not—have direct access to counterfeiters. And for the first time, luxury brands are fighting back and publicizing their victories.

“In the last couple of years there’s been an explosion of counterfeit websites, and it’s become one of our primary focuses,” says Leah Evert-Burks, director of brand protection for Deckers Outdoor Corp., the parent company of Ugg Australia. “They’ve become more sophisticated—taking stock photos, text, the look [of legitimate websites], and offering recognizable payment providers like MasterCard and Visa. And they know if they offer too deep a discount it’s a red flag for consumers, so they are charging closer to retail.”

Deckers has been leading the charge against counterfeit Web retailers. Since 2004, it has regularly been sending cease-and-desist letters to rogue operators and filing lawsuits whenever necessary. The strategy has paid off: Some 19,000 links to counterfeiters have been taken down since its campaign began.

In May the company won a $686 million judgment against online counterfeiters after bringing two cases in federal court in Chicago. Deckers also was awarded control over 3,000 domains, which the company redirected to a website that put consumers on notice that they were being used for counterfeit sales.

Luxury brands Hermès and Burberry also won multimillion-dollar judgments this year against counterfeiters. Each company received separate default judgments of $100 million along with the transfer of website domain names.

“Collecting money and shutting down these websites is really the most effective thing you can do right now to stop rogue operators,” says New York City attorney Scott Gelin of Greenberg Traurig, who in March won an $863 million judgment on behalf of fashion label True Religion. “It’s nice to get a large award so if you do find other assets, you can freeze them. And it does send a message to counterfeiters: Don’t mess with these brands.”

Because it’s difficult to enforce a judgment against an overseas counterfeiter, most companies expect to collect only a fraction of their large damage awards. But on the front end, attorneys work with servers to remove fake sites, and they are beginning to receive more cooperation from major credit card providers as well.

“Overseas counterfeiters need a couple of things to do a transaction with a U.S. consumer, and one of those is payment. If they can’t get payment, they can’t sell to them,” says Deckers’ attorney Tom Fitzsimons of Greer, Burns & Crain in Chicago.

More and more brands are willing to go to court to protect their trademark and reputation than in the past, says law professor Susan Scafidi, academic director of Fordham University’s Fashion Law Institute.

“There are still companies that don’t want an association made in the consumer’s mind,” Scafidi says. “Some don’t want their name mentioned in the same sentence as counterfeiters, but that’s changing.”

Most realize the benefits to winning a judgment against a counterfeiter. A brand can gain control of similar Web domain names, purify its Google results, reach consumers it might not have otherwise and ensure the integrity of its product.

“We want our loyal customer base to know we are taking aggressive actions to protect them,” Evert-Burks says.