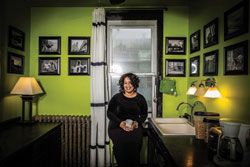 Antoinette Wonsey rents out three bedrooms of her South Side Chicago home to visitors who book accommodations through Airbnb. Photo by Bob Stefko.

When one of his roommates moved out of the three-bedroom, $2,900-a-month Brooklyn apartment they shared, Chris Dannen needed to do something quick to make up for the lost rent.

So he began offering short-term rentals to travelers through the popular website Airbnb. The bookings and cash started coming fast. When his other roommate left a few months later, Dannen rented a second room through Airbnb. Business got so good that he bought hotel-quality sheets for his guests.

In less than a year, Dannen says, he earned nearly $20,000 renting to Airbnb guests from around the world at an average of $65 a night. Then one day there was a knock on his door. A man handed him a restraining order from his landlord, demanding that Dannen stop renting out rooms. The package included a printout of Dannen’s Airbnb profile, along with customer reviews.

Dannen, a senior editor at FastCompany Digital in New York, wound up being evicted 10 days later. He grudgingly accepted that under the terms of his lease, his landlord had the right to evict him for not following the rules by seeking permission each time he got new “roommates.”

But beyond the terms of the lease, Dannen and tens of thousands of others who are renting rooms through Airbnb and other websites operate in a murky area of the law that’s receiving greater scrutiny and creating controversy. At issue is whether those who rent rooms should be subject to the same kinds of regulations and taxes as hotels and bed-and-breakfasts.

Airbnb is a San Francisco-based company that matches travelers seeking affordable accommodations with people who have rooms for rent. The company, launched in 2008, claims to reach more than 34,000 cities in 192 countries.

While Airbnb is careful to inform its users that they’re responsible for complying with local laws, as well as checking their leases and conferring with condo and co-op boards, that hasn’t prevented a host of conflicts.

New York Attorney General Eric Schneiderman served Airbnb with a subpoena last October in an effort to investigate whether Airbnb hosts were avoiding occupancy taxes by operating illegal hotels. The subpoena asked for the tax information and addresses of those who rented out their apartments in New York City, which amounts to about 15,000 people.

Airbnb sought to quash the subpoena, calling the request “unreasonably broad” and a “government-sponsored fishing expedition.” The subpoena also prompted the Electronic Frontier Foundation and the Center for Democracy & Technology to support Airbnb with an amicus brief, taking the view that “legal processes targeting online intermediaries as a means to get to information about their users en masse raises pronounced privacy concerns.”

Airbnb did not respond to requests for comment, including a series of written questions provided by the ABA Journal.

What’s happened in New York is being closely watched by those who support the concept of a sharing economy, a system in which people offer housing, goods and services on a small scale at reasonable prices that compete with the commercial market.

Among them is attorney Janelle Orsi, director of the Oakland, Calif.-based Sustainable Economies Law Center and author of Practicing Law in the Sharing Economy.

Orsi says the problem is that lawmakers did not foresee the complications that arise in a shared economy model, nor did they anticipate the kinds of collaborative relationships being formed with companies like Airbnb. She believes that people should have the chance to earn money from sharing goods and services—even their homes.

But these kinds of transactions often clash with local laws designed to prevent people from turning homes into places of business. “I think what we’re seeing is a reaction that the sharing economy doesn’t fit the traditional legal frameworks,” Orsi says. “Some of the reaction, like New York wanting to ban Airbnb activities, are too extreme.”

There are ways to make it work, Orsi says. She suggests that cities consider allowing residents to have paid guests for a limited number of days per year and collect an occupancy tax. But she also believes homeowners and renters have a right to share through “accessory use,” a zoning term that refers to the ways people customarily and incidentally make use of their homes.

In the case of Antoinette Wonsey in Chicago, police believed she was using her home for more than just incidental use based on the number of people seen coming and going from the residence. “There’s good money in it,” says Wonsey, who rents out three bedrooms, which include bunk beds.

Police were tipped off because they saw many of Wonsey’s guests wandering in the South Side neighborhood where she lives, an area that doesn’t get many outside visitors. Officers cited her for operating a hotel without a business license.

After getting her citation, Wonsey said a lawyer from Airbnb called and they talked, but there wasn’t much he could do from San Francisco. “I don’t know what they could have done. You have to go by the laws of the land where you are,” she says.

David Staudacher, information coordinator for Chicago’s Office of Consumer Protection and Business Affairs, says the city has received complaints about Airbnb and has issued tickets to people renting the spaces without a business license. He did not provide the exact number, however.

Staudacher says a license is required for short-term vacation rentals, and the residence must contain six or fewer rooms for rent. The license costs $250 for two years, and the city’s 4.5 percent tax applies.

Changing the laws to make room for a sharing economy may make the most sense. “These are early signs that we have a lot of work to do,” Orsi says. “All cities will have to look at their own policies about short-term rentals. How much is too much? How much do they charge in taxes? Do they want to regulate safety? I think every city is going to need to do that on its own.”

Orsi points to San Francisco, where city officials seem to have an open mind in working with Airbnb. In fact, Board of Supervisors president David Chiu has reached out to Airbnb to help resolve some of the issues. As a result, Airbnb has said it’s willing to help collect occupancy taxes in San Francisco, as well as in New York City.

Amy Chan, a legislative aide to Chiu, says there are many competing interests, and they have had meetings with residents, property owners, officials from Airbnb, and representatives of the hotel and tourism industries. “We’re trying to create legislation to allow for some flexibility and thinking about how to improve enforcement and come to a solution that is fair,” she says.

Chan says the city doesn’t need to go so far as to ban short-term rentals. “Short of saying we’re going to shut down the activity, we’re asking whether there can be parameters that will allow it to exist,” she says.

For Dannen in New York, those parameters don’t matter at the moment. After moving from his three-bedroom apartment in Brooklyn, Dannen decided to end his short-term rental business with Airbnb.

“I have a studio and live in Brooklyn Heights. It’s not as popular as the other location,” he says. Renting “doesn’t fit my lifestyle anymore. I like this apartment and don’t want to get kicked out.”

This article originally appeared in the April 2014 issue of the ABA Journal with this headline: “Guest Wrong: Website raises legal questions about homeowners and tenants hosting travelers.”