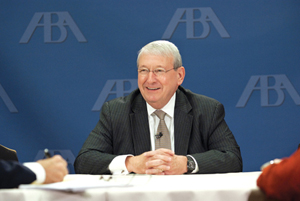 A recent decision to suspend implementation of a con­troversial federal regulation aimed at preventing identity theft gives the ABA more time to press its argument that the regulation should not be applied to lawyers, said H. Thomas Wells Jr. at his final press briefing as ABA president.

Just before the 2009 annual meeting opened on July 30, the Federal Trade Commission announced it would put off implementation of the “red flag rule” until Nov. 1.

“This gives us more time to talk to the FTC,” said Wells, a partner at Maynard Cooper & Gale in Birm­ing­ham, Ala. “I think they’re starting to adjust their interpretation.”

Wells said the FTC has concluded that lawyers who charge contingency fees would not be covered by the red flag rule, which was originally scheduled to go into effect on Saturday, Aug. 1. The FTC cited uncertainty among small businesses about what their compliance obligations would be under the rule.

In response to the FTC’s decision to delay implementation of the red flag rule, the ABA has put on hold its plans to fight the rule in court, Wells said. But he held out the possibility of legal action if the FTC still seeks to extend the rule to lawyers.

The rule, being drafted in accordance with the Fair and Accurate Credit Transactions Act of 2003, calls for financial institutions and other businesses defined as “creditors” to implement programs to identify and respond to warning signs—red flags—of efforts to commit identity theft against their customers.

According to the FTC, the definition of creditor—as outlined by the act—encompasses all businesses that regularly permit deferred payments for goods or services. The FTC has maintained that the definition includes lawyers, who generally receive fees after doing work on behalf of clients.

The ABA, which has been joined by at least two dozen state and local bar associations, maintains that:

• The manner in which lawyers bill their clients does not constitute an extension of credit. Ethics rules prohibit lawyers from billing clients until services are rendered.

• Applying the rule to lawyers would have minimal, if any, impact on identity theft. The FTC has produced no evidence of identity theft occurring in a law firm context, while the ABA estimates that implementation would cost U.S. law firms as much as $3.8 billion in billable time.

Wells said there had been no indication that the red flag rule would be applied to lawyers until the FTC notified the ABA’s Governmental Affairs Office in April that its interpretation of the regulation encompassed the legal profession. “It literally came out of the clear blue sky,” Wells said.