What does it take for a firm to become a Harvard Business School case study? 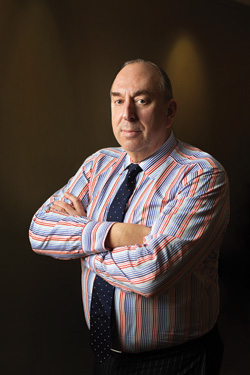 John Soroko: “It’s notable to be the subject of a Harvard case study. … It intrigued us on an intellectual level.” Photo by Steve Boyle.

Among the subjects not covered in law school is the possibility that your firm may be the subject of a Harvard Business School case study.

On the one hand, only a few firms of any kind pique the interest of HBS, which per se confers a certain status upon the chosen few. On the other, selected firms are expected to bare their souls and expose their accounting departments to Harvard’s professors.

John Soroko is the chairman of Philadelphia-based Duane Morris, the 700-attorney firm that has twice been selected for such studies.

“In 2006, Duane Morris was the subject of a Harvard study [Duane Morris: Balancing Growth and Culture at a Law Firm] and I was vice chair of the firm, so I was on the scene and participated with professor Boris Groysberg in its development,” Soroko says. “So in 2012 it occurred to me that with the tumult in the legal industry from 2008 forward,” it might be a good idea for Groysberg to revisit the firm and “chart our progress in what was a difficult time for law firms.”

Soroko ventured up to Harvard to meet with Groysberg, only the professor didn’t feel a follow-up study “was necessarily of great teaching value,” Soroko says. “The more we talked, the more we developed the idea that this study might be of interest to Heidi Gardner,” an assistant professor of business administration in the organizational behavior unit at Harvard Business School.

“Her main area of research is how firms in the professional service area do their best work with collaboration and in teams,” Soroko says, so she wanted to use econometrics to track her hypothesis that one of the reasons we did well is because we have a culture and systems that put a premium on collaboration.”

Econometrics is the application of statistical methods to the study of economic data and problems.

“Professor Gardner spent time with us in early 2013, culminating in a study published in July,” Soroko says. “It started with a small idea and morphed into a full-fledged, several-month study and investigation in an entirely new case study.”

The resulting study, Collaborating for Growth: Duane Morris in a Turbulent Legal Sector, confirmed the firm’s strategy in “maintaining its collaborative culture despite economic pressures impacting the global legal industry.”

So what does a law firm get out of being the subject of a Harvard Business School study? Needed self-reflection?

“There’s an element of that,” Soroko allows. “It was a good mirror to hold up to our systems and our culture, and it was a very interesting intellectual exercise. It’s one thing for us to believe in what we’re doing, but it’s another to have someone from the Harvard Business School down to confirm or modify what we’re doing and what the results are.”

An element of prestige, perhaps?

“It’s notable to be the subject of a Harvard case study,” Soroko says. “We weren’t doing it with prestige in mind, but it intrigued us on an intellectual level—and to have somebody test the system we had working for us to confirm what we were doing.”

Lee Miller, global co-chairman of DLA Piper, also knows what that’s like. “When the firm merged with DLA and Gray Cary in 2005, my co-CEO Nigel Knowles, who had participated in a similar Harvard program, impressed upon us that many of the things we were going to wrestle with as a global business would be discussed in the program,” Miller recalls. “We brought people together from all over the world. We brought in major practice group leaders and leaders in the firm from different geographies.

“The global firm had been organized more by geography as the dominant theme rather than practice groups, as in the U.S. We designed a ‘triple matrix’ approach—practice groups, industry groups and geography. We blended this approach with the main driver being practice groups but being sensitive to geography.”

The result, Miller says, was a “proper alignment of the business of the firm and a furtherance of cultural integration.”

Miller says the firm’s Harvard experience was “very valuable. In one fell swoop we were able to bring people together from across the world to talk in a common language about where the firm was going.”

This article originally appeared in the March 2014 issue of the ABA Journal with this headline: “Class Project: What does it take to become a Harvard Business School case study?”