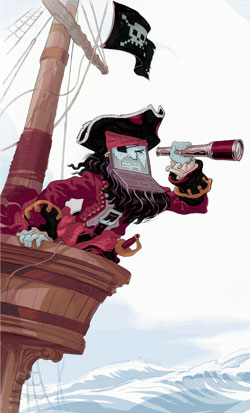 The bills had been backed by influential members of Congress and supported by powerful lobbies. It seemed only a matter of time before they became law and provided potent new tools to stop online copyright infringement.

Then, on Jan. 18, 2012, an unprecedented online protest posted on more than 115,000 websites generated a huge public outcry against the bill in the House of Representatives known as the Stop Online Piracy Act and a Senate version called the Preventing Real Online Threats to Economic Creativity and Theft of Intellectual Property Act. Before the day was over, Congress was flooded with millions of phone calls and emails. Key legislators—including co-sponsors of the bills—withdrew their support, and both measures died a quick death.

Three years later, Congress appears to still be haunted by that outburst of opposition to the bills. That has not, however, deterred the ABA Section of Intellectual Property Law. On July 7, 2014, after 2½ years of study, the section issued a white paper (PDF) urging Congress to enact anti-infringement measures that largely echo those of SOPA and the PROTECT IP Act. Opponents of those bills say the white paper is an effort to revive a debate that already has been settled.

“The white paper itself makes clear it is a retread of SOPA and PIPA. It goes through those bills point by point and essentially intends to revive them,” says Mitch Stoltz, an attorney at the San Francisco-based Electronic Frontier Foundation, whose mission is “defending civil liberties in the digital world.” The white paper “is essentially raising the same arguments that failed spectacularly several years ago,” he says. “It is beyond controversial. It is almost in the realm of the absurd.”

The similarities between SOPA/PIPA and the section’s white paper are not accidental. While Congress was considering those ill-fated bills, the Intellectual Property Law Section formed a working group, which eventually became known as the Joint Task Force on Online Piracy and Counterfeiting Legislation, to evaluate the legislation.

After SOPA and PIPA went down in flames, the group continued working, because “we knew the problem of online piracy and counterfeiting wasn’t going away,” says Robert O. Lindefjeld of Pittsburgh, the general counsel and chief intellectual property counsel for Nantero Inc., who is immediate-past chair of the IP section.

Lindefjeld was one of the task force’s co-chairs, along with Christina D. Frangiosa, an attorney at Semanoff Ormsby Greenberg & Torchia in Huntingdon Valley, Pennsylvania, who is vice-chair of the section’s Trademarks and Unfair Competition Division; and Chris J. Katopis, the executive administrator of Licensing Executives Society International in Washington, D.C., who is vice-chair of the section’s Copyright Legislation Committee.

The task force eventually produced a document, A Section White Paper: A Call for Action for Online Piracy and Counterfeiting Legislation, which included two policy resolutions as well as an in-depth analysis of issues that might be addressed in legislation. The white paper was adopted by the section’s council.

Under the ABA’s blanket authority procedure, the Intellectual Property Law Section sent the white paper to the association’s other sections, which had 10 business days to review and object to the paper. Blanket authority allows a section to submit comments, prepare testimony or produce position papers in its primary area of expertise for consideration by government entities. Blanket authority bypasses the more formal and time-consuming process of submitting policy recommendations to the ABA House of Delegates, but positions developed by sections under blanket authority do not represent association policy. In this case, no other sections objected to the white paper.

In an effort to make its proposals more attractive to groups that opposed the legislation considered by Congress, however, the white paper pulls back from some of its most controversial elements. “SOPA/PIPA placed on Internet search providers a lot of burden of policing against online infringement,” Lindefjeld says. “In the white paper, we took the approach that the burden should be placed on the IP owners. We want a regime where a foreign website would have notice and an opportunity to defend itself, which is another big difference from SOPA/PIPA.”

The white paper also omits one of the acts’ toughest remedies. “The white paper does not recommend blocking the websites of accused infringers, which was probably one of the most odious features of SOPA,” Stoltz says.

Nevertheless, there are strong similarities between the white paper and the legislation, according to many experts. “The white paper largely echoes the proposals of SOPA and PIPA,” says Jonathan Rubens, a partner in the San Francisco law firm of Javid Rubens who is a council member for the ABA’s Business Law Section and immediate-past chair of its Cyberspace Law Committee.

Both the white paper and SOPA/PIPA would create private rights of action against allegedly infringing foreign websites, and they both would allow IP owners to obtain injunctions against innocent third parties to prevent such infringements.

“The white paper basically repackages SOPA and PIPA’s proposals as expansions to courts’ injunctive relief powers,” says Matthew Schruers, vice president for law and policy at the Computer and Communications Industry Association in Washington, D.C., a lobbying group for the IT industry.

TOO BIG TO IGNORE

Lindefjeld maintains that the white paper is “the best workable solution” to a serious problem. But many in the industry say the paper fails to resolve at least three of the concerns that sank SOPA/PIPA.

First, there’s the due process issue of requiring a foreign company, which may have few or no users in the United States, to defend itself in a U.S. court. “The general proposition of suing a foreign website and saying that due process is protected because the website owner can go to a hearing in the U.S.—some would say that is absurd,” says Rubens.

“Is a non-U.S. company supposed to show up in a district court in Atlanta, Minneapolis or wherever the plaintiff chooses to sue? In some sense, that is due process, but I don’t understand where the due process protection is for that foreign company.”

Third, there are thorny free speech issues. “There is fundamentally no way to make the remedies advocated by the white paper consistent with the First Amendment,” Stoltz says. “If a website is deemed to be a bad actor, a ‘predatory foreign website,’ the goal is to make that site disappear from the Internet by attacking it via intermediaries. The effect is to silence speech.”

In response, Lindefjeld says that “giving rights holders the tools to protect their rights is not at all the same as curbing free speech. We are trying to prevent theft.”

Critics of the white paper also say it is vague about when a site should be considered a predatory foreign website. “Who decides which sites are predatory and which ones have free speech interests worthy of protection?” asks Stoltz. “The white paper doesn’t articulate any standards. It slides over the heart of the problem.”

Furthermore, critics assert, a U.S. law that makes it legal to drive foreign websites off the Internet would set a troubling precedent. “It promotes the idea that each country can censor the Internet for the benefit of whatever interests are favored in that country,” Stoltz says.

The Intellectual Property Law Section sent the white paper to Congress in August, but it was essentially dead on arrival. “Congress won’t touch this with a 10-foot gavel,” Stoltz says. “Congress took a real beating on this last time, and they are afraid to do this again. The chance that anyone on the Hill will run with this is slim to none.”

But the white paper’s supporters say Congress must eventually tackle online infringement; the problem is too big to ignore. “I think the odds are high that Congress will act on this—not right now, but maybe one, two years down the road,” Frangiosa says. “And when they are ready to return to the issue, the white paper is there.”