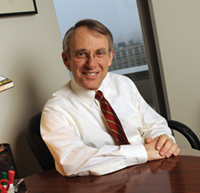 When Boston lawyer David Hoffman started his career as a litigator, his life was less predictable: A trial could mean giving himself over to work for weeks at a time. And, worse, the adversarial process didn’t always fit his values.

“I saw the terrible waste of clients’ time and money in litigation and the terrible impact emotionally on clients, particularly in the family cases, and I decided that I needed to find some other tools,” says Hoffman, who practices family, business and employment law.

Hoffman turned first to mediation and then, in the 1990s, to collaborative law, a process in which the parties agree to share information freely and settle their disputes before going to court. The process, which has been gaining traction as an alternative to traditional negotiation, has also emerged as a professional choice that, for some lawyers, can mean a better balance between work and life.

“Collaborative practice is in alignment with my values as someone who wants to bring greater peace and healing to the world,” says Hoffman, who in 2003 founded Boston Law Collaborative, a firm that focuses on alternatives to litigation. Hoffman is also co-chair of the ABA’s Collaborative Law Committee.

“The second way my life has been improved is that most of the work I do is done in meetings. I can schedule my life, and my life is less chaotic than it would be if I were running in and out of court all the time.”

Collaborative law, which emerged in the early 1990s, is on the rise: The International Academy of Collaborative Professionals, which started in 1999 with just 30 members, has grown to 4,000 members in 20 countries, says Talia Katz, the group’s executive director. The majority of members are lawyers or mediators.

The process is used most often in family law, but it can be applied in other areas. It doesn’t work with every case or client—Hoffman still litigates occasionally—and both sides must be committed to open disclosure of information and resolving the issues outside of court.

Susan Hansen, a Milwaukee attorney who practices family law and is a past president of the academy, says her own shift from litigation to collaboration—something she initially approached with some skepticism—has represented a “return to what took me to law school in the first place.”

“The shift for me is I became more of an educator, an adviser and a problem solver,” she says, “and less of a weapon.”

Hansen, who spent several years as a junior high teacher before becoming a lawyer, worried about the impact adversarial negotiation can have on children in divorce cases.

“If you look at even traditional negotiation—much less outright litigation—on child issues, it really is a system that pits people against one another,” she says. “And when you function in that type of process, even if there’s an agreement at the end, you’ve gone through a process that’s been divisive and polarizing.”

In the past eight years Hansen has used collaborative law in more than 100 cases. Only three could not be resolved through collaboration; one of those went to litigation. A separate five cases resulted in couples reconciling without ever divorcing.

For Hoffman, a passion for collaborative law is reinforced by the sense of community he feels when interacting with attorneys who are devoted to a common purpose.