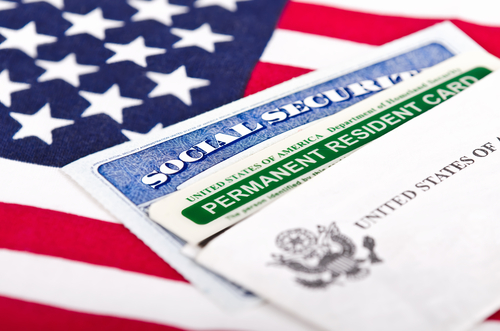 The ABA House of Delegates on Monday voted to urge Congress to allow state courts to permit immigrants who are seeking legal status to obtain licenses to practice law, and to support "the principle that bar admission should not be denied based solely on immigration status."

The issue of whether immigrants who are in the United States without authorization can practice law has been under debate for the past few years, particularly when they arrived in the country as children and have been allowed to attend college and law school.

For example, Cesar Vargas arrived in the United States as a 5-year-old from Mexico and had been authorized to remain in the country under the Deferred Action for Childhood Arrivals program. He graduated from the City University of New York School of Law and passed the New York bar exam in 2011, but he was not immediately allowed to join the state bar. In 2016, Vargas was finally permitted to practice law in New York.

Other states, like California, have also allowed immigrants living here without legal permission to be admitted to the bar. However, in Florida, the state supreme court in 2014 overturned legislation that had been passed to allow such immigrants to practice, ruling that federal law prohibits them from receiving a state benefit.

Thomas Kim, the 2017-2018 chair of the ABA Law Student Division, rose to speak in favor of Resolution 108. He said that his family had legally entered the country from South Korea 12 years ago, but through the actions of an unscrupulous lawyer the family had relied on, they were no longer in compliance with immigration laws. It was this experience that fueled his desire to become a lawyer and help families like his, he told the delegates. He urged them to pass the resolution and secure his future.

Jack Long of the State Bar of Georgia praised Kim for his intelligence, and said that many law students in his situation would also make fine lawyers, but he opposed the resolution.

“I would love to call them brother and sister lawyers,” Long said. But he felt that by supporting the resolution, the ABA would not be upholding the rule of law.

Long also said he felt that by not following the immigration laws, law students like Kim were not meeting character and fitness requirements. He compared their situations to that of lawyers who had been convicted of DUIs and could not immediately join the bar. Long said that he remembered rifling through drawers when he was applying to the bar, to make sure that he’d disclosed every speeding ticket.

Long criticized the resolution for potentially “giving false hope to people who will take out tremendous amounts of debt” and yet be unable to find employment. He said that even if they were licensed, lawyers in these circumstances would not be able to take jobs in the government sector, at schools or with law firms who follow E-Verify standards.

René Morency of the Law Student Division spoke in support of the resolution. He said that as the son of an immigrant, “I was born with citizenship; that was my birthright, but it was not something I earned.” Were he born five years earlier, he said, he might have found himself in Kim’s position. He criticized Long’s comparison of Kim’s situation to that of a lawyer with a DUI offense. “When you drink and drive, there’s a element of intent,” Morency said, and that was not the case with people who had been taken into the United States by their parents as children.

“Dreamers like Mr. Kim attend law school in a cloud of uncertainty,” Morency said. He urged members to vote in favor of the resolution.

Andrew Gowder of the Section of State and Local Government Law rose to say that members from his state delegation had voiced some concerns with the resolution, but that there was general support for the spirit of it. With the addition of language clarifying that the resolution would apply to those who are seeking legal status, Gowder said the resolution had his support.

There were votes opposing the resolution, but it was passed by the House of Delegates in a voice vote.