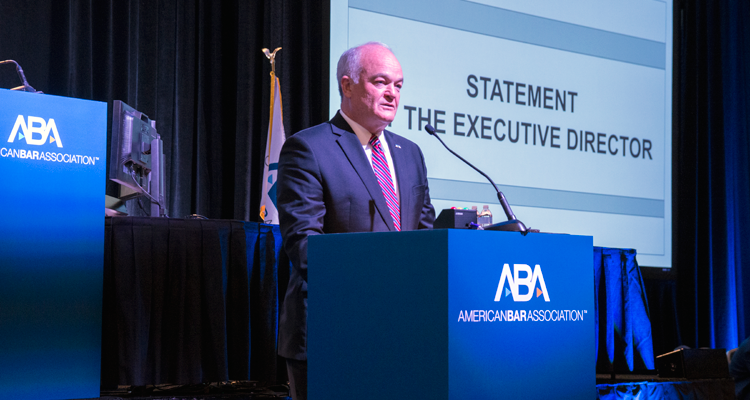 Updated: "It is a great time and it is the right time to be a member of the American Bar Association," ABA Executive Director Jack Rives told the House of Delegates Monday at the Annual Meeting in San Francisco.

The House of Delegates and Board of Governors took several actions last year that have helped move the ABA forward, Rives said, including introducing a new dues structure.

Rives says that the ABA has made much progress in the 100-plus days since May 1, when the new plans were implemented.

“Another way of looking at it is we want to improve the profession and help individual lawyers be better lawyers,” he said. “Advance law, advance lawyers.”

Members also benefit from the new CLE Marketplace, which currently offers more than 400 titles on demand. He said by this time next year, there will be 650 available titles in the on-demand library.

In the past, all lawyers—whether or not they were ABA members—could access nearly everything on the association’s website, Rives said. But now, more than half of the ABA’s content is only available to dues-paying members.

Rives added that the ABA is improving the member experience through the ABA Career Center, which currently houses 10,000 resumes of legal professionals and has provided details on nearly 3,000 available jobs. The new website, which launched in October, has experienced some problems, but it is also an important part of the value proposition moving forward, he said.

The ABA also recognized that it needs to market more effectively, Rives said, which was part of the reasoning behind adopting a new logo and brand standards at the midyear meeting in Las Vegas.

The ABA worked with The Atlantic to create a sponsored article that highlights the value of membership. The ABA is also increasing its digital advertising efforts through paid social media and online banner ads, Rives said.

Rives also highlighted the successes of many of the ABA’s ongoing initiatives:

• The Death Penalty Representation Project has represented 345 people on death row since 1988 and secured release for 102 of them.

• The ABA has represented 20,000 unaccompanied children in immigration proceedings. Rives contended that children without representation are only permitted to stay in the country in 15% of cases. However, he said recent statistics show that if they do have a lawyer, they are able to stay in 73% of cases.

• Three years ago, in San Francisco, the House of Delegates adopted Resolution 113 to help ensure economic fairness for diverse attorneys, Rives said. Since then, 105 corporations signed the pledge, and more than 400 law firms agreed to take the ABA’s Model Diversity Survey. The results are scheduled for release next year.

• The ABA’s Rule of Law Initiative uses grant funding to expand the rule of law in more than 100 countries. As just one example, Rives said that ROLI has helped 11,000 survivors of sexual and gender-based violence in the Democratic Republic of Congo and the Central African Republic.

• Through ABA Free Legal Answers, 76,000 questions were answered in the past two years for people living below the poverty lfine.

Rives also highlighted the Profile of the Legal Profession, a 100-page collection of statistics and trends released Saturday to further establish the ABA as the go-to source for information about lawyers.

“This is a time of change. The things we are doing in the next several years are not just going to shape our association, but they will shape our profession.”

A SURPLUS IN THE TREASURY 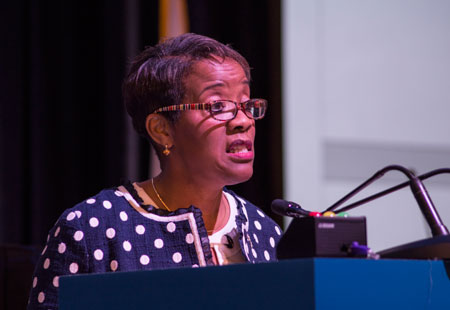 Michelle Behnke delivers the treasurer’s report to the ABA House of Delegates.

The following day, ABA Treasurer Michelle Behnke gave the House of Delegates an update on the association’s finances.

“I am reminded that the first rule of journalism is don’t bury the lede,” Behnke told the House.

“This is not the place you want to be, but it’s not a new phenomenon,” Behnke said.

“We do have two areas that we have to monitor between here and end of the fiscal year,” Behnke said. “Dues, we expect to continue to have a shortfall, and we expect that our grants will still be lagging behind. Between now and year-end, stay tuned, because the surplus will shrink a bit.”

Behnke also provided an overview of the fiscal year 2020 budget that was adopted by the Board of Governors during the annual meeting. The budget projects $85.4 million in general operations revenue. With $52.2 million in sections, $70 million in grants and $5.2 million in gifts, the total consolidated operating revenue would be $212.9 million for the next fiscal year.

She specifically pointed to dues in the general operations revenue, which is budgeted at $42.9 million to reflect the repricing of membership dues. “For the first time with the repricing, our dues will actually not be the largest source of revenue in our budget,” Behnke said. “Grants will exceed dues revenue.”

The ABA is also analyzing ongoing expenses associated with the new membership model, revising its spending policy and incorporating more robust revenue from stewardship, she said.

“We are working to ensure that there is always money to carry on this association’s mission,” Behnke said.

Updated on Aug. 13 to include the ABA treasurer’s report.