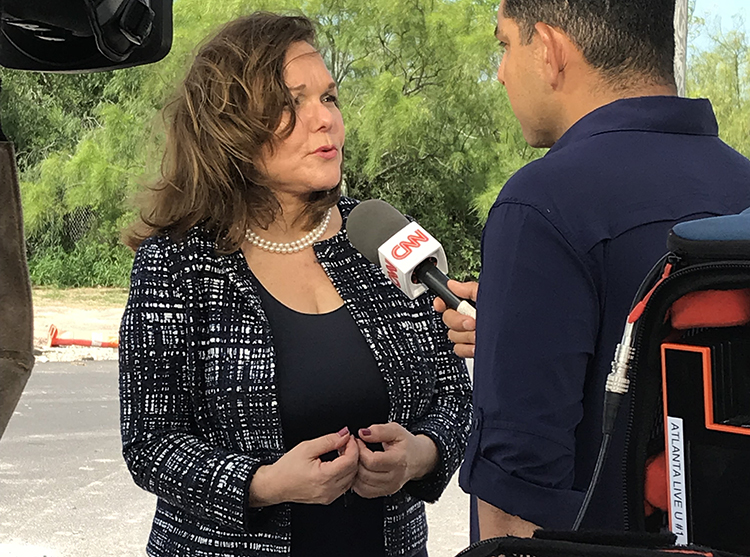 It’s not just the crying that concerned ABA President Hilarie Bass when she met with mothers detained at South Texas’ Port Isabel Detention Center. But there was crying.

“It was clear they would give up anything to get their children back. And so to the extent that separation of the mother from her children was done in a punitive way, to prevent them from asserting legal asylum claims, I’d suggest it may well be effective,” she says. “And that’s of tremendous concern to me, and should be of concern to any American lawyer.”

Bass traveled Tuesday to the Rio Grande Valley of Texas to see how American lawyers can help families separated by federal immigration authorities. Public attention has focused on that situation over the past two weeks, as images of immigrants in chain-link holding cells and audio of children weeping for their parents found their way into the media. Bass was also looking at the due process implications of the “zero tolerance” policy—announced in early April by U.S. Attorney General Jeff Sessions—for people who cross the border without authorization.

Those due process concerns were on display for Bass in the morning in the McAllen, Texas, federal courthouse for the Southern District of Texas. There, Bass saw 75 defendants plead guilty en masse to the misdemeanor crime of illegal entry. Each got only a few minutes with a public defender before their hearings, ABA Media Relations said on Twitter. All got “time served”—which, according to ABA South Texas Pro Bono Asylum Representation Project director Kimi Jackson, is typically a couple of days in a U.S. Customs and Border Protection holding facility—before being remanded directly into an ICE detention center.

Given all of that, Bass questions why a zero-tolerance policy is necessary.

In the evening, Bass was scheduled to have dinner with Jackson and other attorneys at ProBAR, as well as other attorneys active in representing the large population of detained immigrants in the Rio Grande Valley. ABA Media Relations says the plan was to talk about what they’ve observed and what kind of help they can use. But even before the dinner, Bass said it was clear that Spanish-speaking immigration attorneys were the critical need in South Texas.

“Because for the most part, these women are unrepresented,” she says. “And they have no understanding of what their rights are, or when they need a lawyer in the process, or how to protect their own legal rights, or how to seek reunification with their children.”

Bass encouraged those who can’t volunteer to donate to ProBAR, which they can do through the ABA’s Fund for Justice and Education.

The more than 2,000 children taken from their parents by the federal government are overwhelmingly Central Americans seeking asylum because of unchecked criminal gang violence in their home countries. One attorney told the Los Angeles Times Monday that parents are being told they will be reunited with their children if they agreed to withdraw their asylum claims and accept deportation—the exact kind of due process concern Bass raised.

After protests and bipartisan condemnation of the family separations, President Donald Trump last week reversed himself and signed an executive order ending the policy. That order requires families to be held together pending deportation hearings, which is likely to face a legal challenge. Through a long-running case on the rights of immigrant minors, a federal court ruled in 2015 that children may not be imprisoned with their parents. The Justice Department has asked the court to permit it, but it’s unclear what new information it could present that would change the judge’s mind.

Meanwhile, it’s unclear how more than 2,000 children who have already been taken from their parents can find them again.Advocates for immigrants report long waits during calls to government hotlines that yield little information. Left-leaning group Lawyers for Good Government is organizing a pro bono effort to reunite those families.

U.S. Customs and Border Protection said Tuesday that it would temporarily stop prosecuting adults in families with children, unless the adults have criminal records or pose a danger to the children. White House Press Secretary Sarah Huckabee Sanders said the government was simply running out of places to detain immigrants.