Twenty-four years after the founding of the first access to justice commission, the American Bar Association has released a report analyzing the the structure, activity, staffing and funding in 40 state and U.S. territory commissions.

“Access to Justice Commissions: Increasing Effectiveness Through Adequate Staffing and Funding” was compiled for the ABA Resource Center for Access to Justice Initiatives. The first access to justice commission was founded in 1994 in the state of Washington, according to the ABA Standing Committee on Legal Aid and Indigent Defendants.

The report states that its purpose is to “help support the development and expansion of access to justice commissions by centralizing information about how they are staffed and funded, providing examples and links, and encouraging the strategic use of resource development ideas.”

A 2016 study by the Legal Services Corp. found that 86 percent of low-income Americans with a civil legal problem received either inadequate or no help.

Focused on the functionality of these commissions, the report found that having professional staff; active stakeholder involvement, including legal aid; and outside fundraising led to more effective commissions.

While the report includes anecdotal examples, it is unclear if the report’s key findings correlate with improved access to justice. The report did not include a methodology section.

Access-to-justice commissions are usually established by a state’s supreme court. They focus on a variety of issues that aim to increase access to the civil legal system through improved funding, pro bono services, services for self-represented litigants, translations of court resources and online self-help centers.

The report was funded by the Public Welfare Foundation. 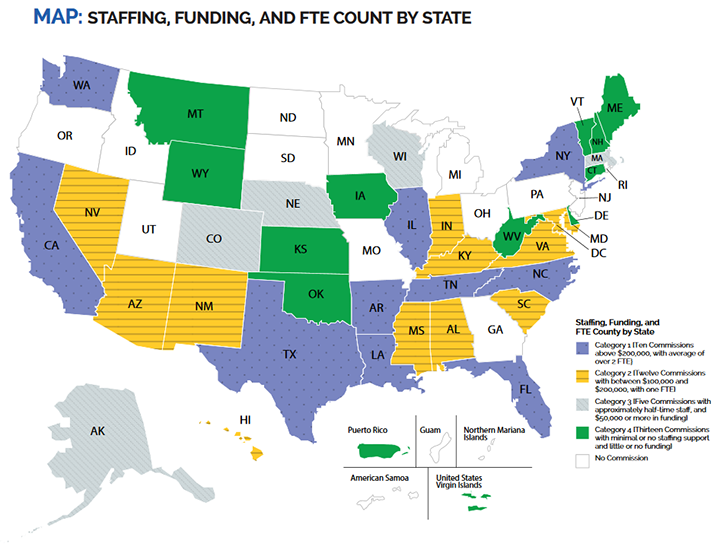