ABA should 'trumpet the essential values of our democracy,' says president-elect nominee Martinez 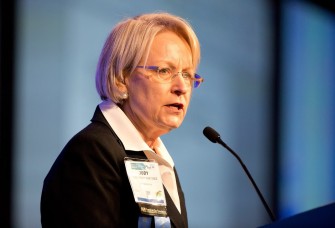 The ABA remains the voice of the legal profession, says ABA president-elect nominee Judy Perry Martinez, and “we must use that voice to trumpet the essential values of our democracy.”

Martinez addressed the ABA House of Delegates on Monday at the 2018 ABA Midyear Meeting in Vancouver. She opened by thanking her husband, Rene, for his support and parenting of their four children. “My life is fulfilling and loving because of him,” she said.

She also thanked her firm, Simon, Peragine, Smith & Redfearn in New Orleans, where she spent the first 21 years of her career. She returned to be of counsel with the firm in 2015 after more than 10 years with the aerospace and global security company Northrop Grumman.

Martinez’s experience in the tech industry was echoed in some of her remarks as she called on the ABA to innovate and embrace technology and become “stronger and nimbler.” She says the association must equip and empower lawyers, providing value to members with “greater operational efficiency.”

The ABA has “begun to take bold steps” to get on firm financial footing, says Martinez. “This association will rise to a new zenith as it serves its members, defends liberty and pursues justice.”

She also voiced support for the independence of the judiciary, the rule of law, a free press and immigrants, calling on lawyers to “make possible the dreams not only of those who were blessed to be born here.”

While Martinez did not spell out the initiatives she plans to pursue during her future term as ABA president, she called on ABA members to be leaders in the profession, the country and the world.

“The world is fundamentally changing, and with those changes come challenges and opportunity,” Martinez says . “We the lawyers will lead, by instilling in the public a renewed sense of confidence in our justice system.”

Martinez will automatically become the president-elect after the close of the 2018 ABA Annual Meeting this August in Chicago, and assume the presidency of the ABA for a one-year term beginning in August 2019.

Read her full remarks to the House here: