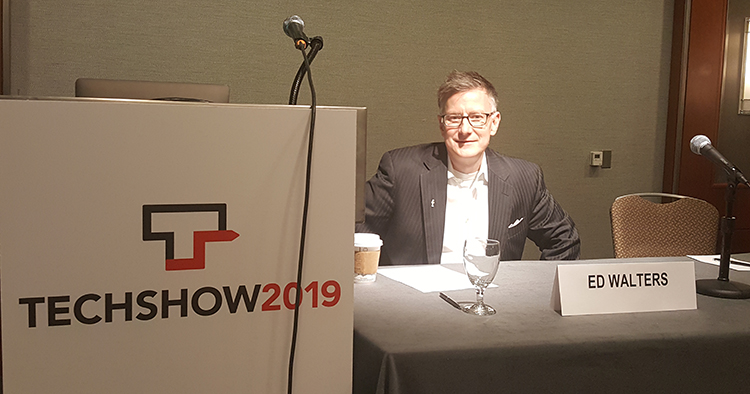 The conversation around artificial intelligence is often bogged down by jargon and metaphors relying on our notions of magic rather than our knowledge of science.

This is the wrong approach, according to Ed Walters, CEO of legal research company Fastcase and panelist on Thursday’s “Practical Magic: Actual Uses of Artificial Intelligence in Real Law Firms” at ABA Techshow in Chicago.

There’s “no pixie dust, no unicorns, no razzle-dazzle,” he says. “Think of [AI] as tools that accomplish tasks.”

Walters says in the same way that machines were built to mechanize human labor during the Industrial Revolution, AI is the digital revolution’s interloper that will replace the menial work done by today’s laborers.

Walters declined to get into the definitional debate of what AI is, but instead took the standing-room-only audience on an exploration of existing applications of AI in and outside of the law.

By only analyzing the testimony, the program determined that Cohen was achievement-striving but cautious, while low on the cheerfulness scale.

Walters says this type of analysis could be useful to lawyers analyzing depositions and testimony related to a legal matter.

Walters, who recently wrote a book on data-driven law, went on to note that tools like IBM Watson are built on robust data sets that help “train” artificial intelligence software. To illustrate this point, Walters showed how maps improved throughout history—early explorers thought the Baja California Peninsula was an island—as technology allowed humanity to collect more knowledge about a region.

In the same way that maps became more accurate with better information, Walters thinks the legal system can be improved with better data.

“Think of analytics as stories—as maps to legal journeys,” Walters said, while making the point that the legal profession is largely in “the age before maps.”

With increased attention to collecting and structuring legal data, the profession can begin to help lawyers and clients better understand the nature of a legal matter. Instead of relying on a “hunch,” Walters said, data can help attorneys and their clients better know how much a matter is going to cost, for example.

This isn’t to say that AI is here to do all of the work or take over the legal profession. Walters expressly called attention to the problem of small data sets and how too little data can lead to an under-informed algorithm and incorrect results.

Nevertheless, with applications already in use in both e-discovery and legal research, Walters is bullish on where AI can take the profession.

“AI is not infallible,” he says, “but artificial intelligence has the potential to do what we’ve done in the past, especially the worst work.”