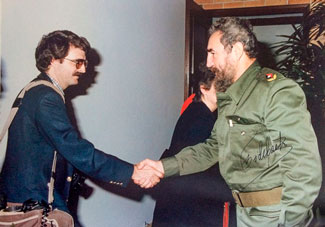 Longtime ABA Journal freelancer Tom Salyer has been taking photographs for our 101-year-old publication for roughly 25 years. If you enjoyed this month’s Cuba cover story, you have him to thank for the portraiture of seven of the attorneys quoted, including a compelling shot of former ABA president and Cuban-American Stephen Zack posed in his Miami office with his framed, prerevolutionary Cuban flag. This particular assignment, accompanied by the timing of the easement of the trade embargo, brought to light a unique recollection of Salyer’s brief brush with notoriety—an actual meet-and-greet with Fidel Castro.

As a young man, Salyer was a United Press International staff photographer. And in January of 1984, UPI had a nearly three-hour private interview with Castro in Havana.

“I found Fidel to be charismatic and thoroughly versed in world affairs,” Salyer said. “He displayed his sharp sense of humor with a sly reference to President Ronald Reagan’s ‘friendship with that monkey,’ a nod to Bedtime For Bonzo, a 1951 film featuring the then-Hollywood star and a chimpanzee—which is actually an ape, not a monkey.”

Salyer has a photo of himself shaking Castro’s hand as a memoir from the day. “Maybe Fidel autographed the photo as he knew it was an historic occasion—the first time I had worn a tie since my wedding 10 years prior.”

Salyer’s assignment for our cover story, “A New Dawn for Cuba,” was to photograph Florida-based attorneys in locales significant to Cuban-American history or in environments that would compliment the yet-to-be-featured scenic shots of Cuba and its predicted economic progress. One such photo was of attorney Anna Marie Hernadez standing in the Freedom Tower in Miami, where Cuban refugees where processed from 1962 to 1974.

“This Cuba project has has been a lot of fun. Even when, one Wednesday on the roof of attorney Peter Quinter’s office in Fort Lauderdale, I managed to run my car completely dead while I was powering my strobes off a DC/AC inverter clipped to the battery,” Salyer said. Because of noise from exhaust vents on the roof and construction nearby, Salyer couldn’t hear that his car had stopped running. “Even though the mobile car-washers who were also on the roof helped me jump my car, my jumper cables were no good, and I had to call AAA.”

It’s this sort of dedication we’ve come to expect from Salyer and the bevy of photojournalists we regularly use. Read the Cuba cover story here.

Posing atop his own office building to display a skyline of progress, attorney Peter Quinter was a very willing subject. This candid panoramic portrait reveals what went on behind the scenes, displaying the level of effort photographer Tom Salyer went to get the shot—even running down his car battery.