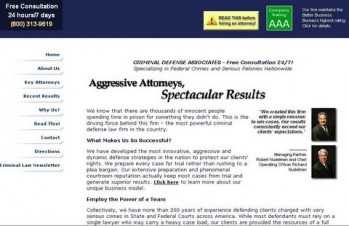 Robert Michael Nudelman, 59, agreed Monday that the State Bar of California could take over his insolvent firm, Criminal Defense Associates Inc., in the Woodland Hills area of Los Angeles, reports the Metropolitan News-Enterprise, a local newspaper. He also agreed to surrender his law license, but that offer has not yet been formally approved by the California Supreme Court, of which the state bar is an administrative arm. Meanwhile, bar authorities have reportedly seized nearly 700 client files, of which 162 are active criminal cases, and have frozen the firm’s trust accounts.

Nudelman, a lawyer since 1975 who had no criminal experience before establishing the one-partner firm in 2003, allegedly used client retainer money for personal expenses and shared legal fees with a non-attorney relative who helped him establish the firm, reports the News-Enterprise. The firm, which was marketed nationally on the Internet as specializing in sex and drug offenses, employed nearly a dozen seasoned criminal defense lawyers, but some gave legal advice in states in which they weren’t licensed to practice, according to the state bar.

The firm’s business practices violated a number of ethical rules, including requirements that client funds be maintained in a trust account and that unearned legal fees be refunded promptly to clients, according to Scott J. Drexel, chief trial counsel for the state bar. Its business model also was “fraught with problems,” Drexel said in a written statement, contending that CDA “graphically demonstrate[s] the inherent danger to potential clients and the public in the operation of a nationwide law firm based largely upon Internet advertising and without adequate administrative controls or supervision.”

Nudelman could not be reached by the newspaper.