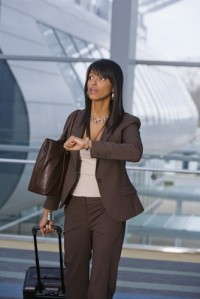 If Dayan Hochman and Anthony M. Ciolli represent their clients with the same gusto that they bring to advocating participation in frequent-flier and other travel rewards programs, they’re going to win a lot of cases during their legal careers.

Hochman and Ciolli were the presenters at a program Friday morning during the 2016 ABA Annual Meeting in San Francisco that veered from the usual substantive law topics that dominate meetings like these. The program, titled “Fly Me to the Moon: How to Make the Most Out of Frequent-Flier Programs,” was sponsored by the Young Lawyers Division.

“Everybody should join a frequent-flier program. It’s like free money,” said Hochman, an attorney at Eckert Seamans in Washington, D.C., who chairs the YLD’s Air and Space Law Committee. “If you spend time to build up your relationship with them, it will pay off in the end, even though it can involve some short-term inconvenience.”

That is why Hochman favors programs sponsored by specific airlines, hotel chains and car rental companies over third-party services that check multiple providers in search of the lowest prices. “Using third-party websites is one of the biggest pitfalls because you don’t develop a relationship with a carrier, and you can usually match the fares directly with the carrier.”

Hochman said credit cards with mileage programs also carry significant benefits. Not only do they reward customers with points that “are basically free money for purchases you would have made anyway,” she said, but they help young professionals build credit and offer substantial sign-up bonuses, such as extra points.

“Miles and points are money,” said Ciolli, a lawyer in the U.S. Virgin Islands who represents the Virgin Islands Bar Association in the ABA House of Delegates. “You need to treat them as currency.”

But getting to the benefits of frequent-flier programs takes some effort, said Hochman and Ciolli, especially since many of them have been modifying their terms in recent months. The biggest recent change is to convert from mileage-based programs to revenue-based programs, which allocate rewards on the basis of how much the customer spends on tickets and related services. And increasing numbers of mileage credit cards are charging annual fees, sometimes as high as $500.

It’s a little like gambling at a casino, Hochman said. “The house always wins—just remember that.”

The key to using travel rewards programs effectively, Ciolli said, is that “you need to know who you are and what you want. You need a plan. If you want to fly to Europe for your honeymoon, you’re not going to join the Southwest Airlines program because they don’t fly to Europe.” And, he said, “Don’t bother earning points speculatively because the rewards programs change so much. You can only exploit a program in the short term.”