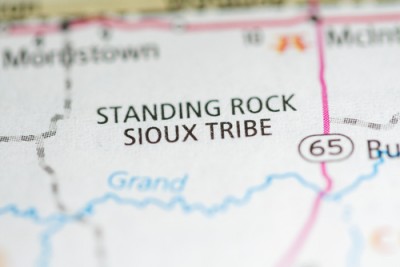 The ruling by U.S. District Judge James Boasberg rejected a request for an injunction from the Cheyenne River Sioux and Standing Rock Sioux Tribes, which objected to the pipeline being built under Lake Oahe. The lake abuts both tribes’ reservations, and the tribes had raised concerns about a potential spill contaminating their water supplies.

In the request for an injunction, the tribes had also argued that pipeline would make the water spiritually impure, harming their ability to use it for religious ceremonies. They said the pipeline resembled a tribal prophecy about a black snake that would harm them, and also said other water sources in the region are no alternative because they’d been polluted by mining.

Boasberg rejected those arguments, noting that the Cheyenne River Tribe hadn’t raised them in the prior two years of legal disputes.

The Dakota Access Pipeline became a major issue in 2016 when thousands of Native Americans and their allies camped out on the plains in an attempt to block the building of the pipeline. Protesters had several confrontations with local police and representatives of the oil company building the pipeline, Energy Transfer Partners. The standoff reportedly inspired North Dakota bills making it a crime to wear a mask or hood while committing a crime and expanding the government’s ability to bring in out-of-state police. A failed bill would have removed liability for drivers who accidentally kill or injure pedestrians on highways.

Under President Barack Obama, the Army Corps of Engineers denied the oil company a permit to cross the Missouri River. But within days of taking office, President Donald Trump issued an executive order that expedited the securing of the final permit.

Energy Transfer Partners said in a court filing that it would start pumping oil through the pipeline during the week of March 13.

Standing Rock Sioux tribal chairman David Archambault II said his tribe would continue the case, litigating over issues like the legality of permits issued for the pipeline construction. The court is set to hear a request to stop oil from flowing through the pipeline until the Army Corps of Engineers completes an environmental impact study.

Attorney Chase Iron Eyes of the Lakota People’s Law Project said the pipeline threatens water supplies for 17 million people living along the Missouri River. An earlier proposed route that would have crossed the river north of Bismarck was rejected, in part because it could have threatened Bismarck’s water supply, the Bismarck Tribune reported in August.