First One @ One First: Fortune from Miscalculation

Jordan Salberg arrived at One First Street on Sunday afternoon to find a group of 10 undergraduates from Eastern University in Pennsylvania fronting the general admission line for Monday’s oral arguments in Christian Legal Society v. Martinez.

Perfect, he thought: Salberg, a first-year at American University’s Washington College of Law, came to see City of Ontario v. Quon, Monday morning’s second argument. The undergrads would exit the Court after CLS and leave him the best (unreserved) seats in the house.

Salberg felt so warmed by his fortunes that he lent his air mattress and quilt to unlucky No. 13, who showed up from Seattle to sleep on the sidewalk without any protection from the cold concrete and unseasonably wintry winds.

But that was before Salberg decided to move his car at 6:45 a.m. When he returned shortly after 7 a.m., the court police had moved the line up from the sidewalk to the plaza and handed out numbered placeholders. Salberg’s guaranteed No. 11 disappeared; as far as the line was now concerned, his 15-hour wait never happened.

Yet as all hope looked lost, karma stepped in. A man holding No. 44 came forward and gave Salberg his placeholder.

“What goes around comes around,” said Salberg.

That’s exactly what I thought when the sprinklers sprang up at 1:23 a.m. Monday morning.

My original plan was to get to the court around 11 p.m. Sunday night to beat the lone wolves I calculated would arrive shortly after midnight. But in the middle of eating dinner and watching The Wire with the First Lady of First One @ One First, I received a tip that the line was already 30 deep. Accordingly, my relaxed evening with the [email protected] turned into a mad scramble to get me out the door.

Twice before I hadn’t claimed the first spot in line, but never had I sunk past third, let alone the 30s. This felt downright humiliating, and no amount of good company at the back of the line—and there was plenty—could get me to shake that feeling.

I fought my sense of mission failure by stalking up and down the sidewalk seeking and finding good conversation to shut out the cold. But then the sprinklers emerged from their winter hibernation to remind us that, at least according to the calendar, spring had arrived.

Those of us who hadn’t succumbed to slumber rushed to our spots and gathered up our belongings. By some miracle, on the one night I brought my laptop with me, my stuff emerged as the only property left unsprayed throughout the line. And if that wasn’t enough to relieve my hurt pride, I looked to the head of the line to find the students from Pennsylvania rudely awoken by a particularly brutal soaking. 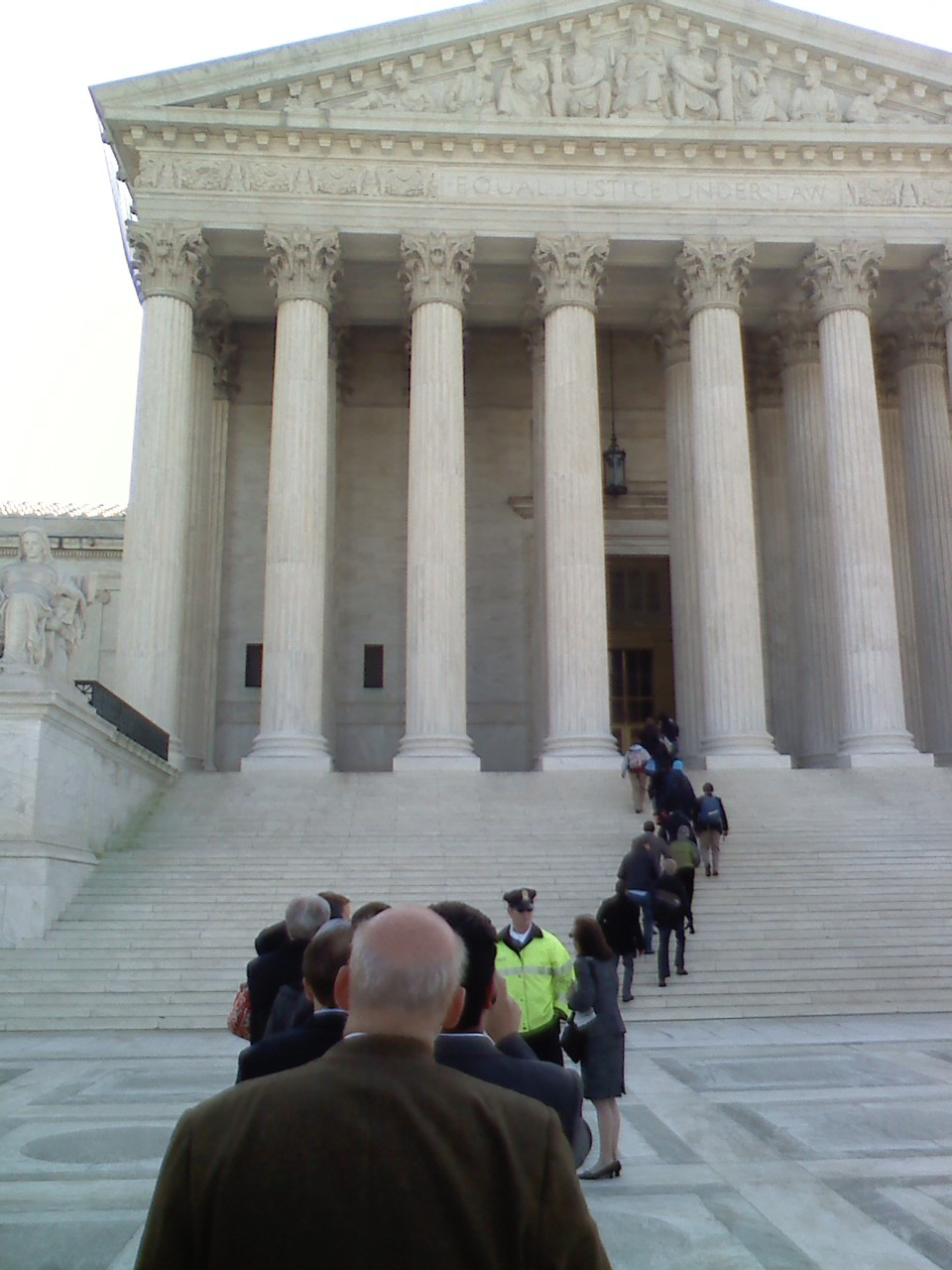 But I was wrong to take vengeful pleasure in their discomfort. They had been out there since noon Sunday. By my standards, they should be recognized as heroes. Even as they took all that the sprinklers had to give, most of them proved to possess an indomitable good cheer.

“It’s all part of the experience,” one student stated as she shook out her sleeping bag.

Also part of their experience was a pre-trip role play in which each of them assumed the identity of a justice or a lawyer in a moot of CLS. Ashton Dennis, who served as CLS’s advocate in the simulation, reported that she won by a 6-3 vote of the conservative bloc and Justice Kennedy. But who was the sixth vote?

“Justice Sotomayor,” Dennis reported. “She’s very anti-discrimination, and the First Amendment’s guarantee of freedom of religion plays a stronger role” for that purpose in this case than the Establishment Clause.

As for the justices, Tim Eckhart played Antonin Scalia: “I think I ostracized some of my classmates,” he said to considerable laughter.

And, as it turns out, everyone had to make at least one statement during the moot. This means that one student’s burden generated big news, at least in their imaginary world. That’s right, for the first time in over four years, Justice Thomas asked a question!

But this wasn’t the last of the line’s fortuitous stories. Martha Grabchuk is a second-year at UC Hastings, and a member of the very CLS chapter that brought the case at issue Monday morning.

But at Hastings, “this case was kept very much on the down-low” she said. So much so, in fact, that she hadn’t even heard of the case until she became a visiting student this year at Seattle University Law School. And a good thing, too: for someone who cared enough to fly across the country and get in line at 6:30 p.m. Sunday, her departure from CLS’s ground zero allowed her to join fellow members from across the country to witness the case at its apex.

Come 3 a.m., most of my neighbors mimicked the sprinklers and retired for the night. The only ones still standing were Grabchuk and her large CLS cohort from across the country. But at that hour, there was no sign of the politically charged fight we would see inside the court the next morning over a group’s ability in a public forum to limit its membership according to its religious beliefs.

Instead, outside on the government’s doorstep, my end of the line created its own public forum: A same-sex couple slept peacefully between a Catholic law student spooning his engaged female friend and the CLS folk merrily debating the supremacy of Kobe or LeBron.

Had I been the First One at One First last night, I would not have fallen asleep in the heart of that wonderful, American tableaux. Out of gross miscalculation came great fortune.