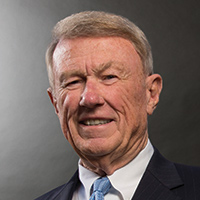 John Bouma, who chaired Snell & Wilmer for 32 years, died Tuesday evening when he was struck by two cars after walking onto a Phoenix street.

Police said Bouma, 82, may have walked onto the street to recover an unknown item, report the Arizona Republic, the Phoenix Business Journal and 12 News.

He also was former president of the State Bar of Arizona and co-founder of the Equal Justice Foundation, which provides legal services for the poor. He was on the boards of several philanthropic and community groups.

He had represented three Arizona governors, including Jan Brewer. “He was more than a great lawyer; he also had a big heart,” Brewer told the Arizona Republic.

Bouma continued to practice law as a partner after he stepped down as chairman at Snell & Wilmer in 2015. His focus was complex commercial litigation.

Matthew Feeney is the current chairman of the law firm. “John Bouma made this into a firm of great lawyers and great people,” Feeney told the Arizona Republic. “His vision was to move Snell & Wilmer [beyond] Phoenix.”

Feeney told the Phoenix Business Journal that Bouma “believed deeply that it was everybody’s responsibility, at least in this law firm, to give back. Some law firms tolerate spending time in the community; we require it. And that comes from John’s values.”