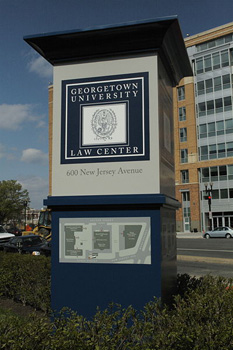 The Georgetown University Law Center has launched an institute bringing together expert prosecutors and students to litigate high-profile cases in efforts to defend constitutional rights in matters such as discrimination, immigration, national security, privacy and whistleblower protection, the school announced Wednesday.

The new Institute for Constitutional Advocacy and Protection’s faculty director is Neal Katyal, who successfully argued Hamdan v. Rumsfeld, the 2006 Supreme Court decision that applied the Geneva Convention worldwide in the “War on Terror” and forced the Bush Administration to cease waterboarding.

The institute will use the strategy in that case as a model in rolling back unprecedented government policies.

Its launch was a working one. On Wednesday, the institute filed an amicus brief in O’Donnell v. Harris County, a class-action challenging the south Texas county’s practice of jailing those charged with misdemeanors who are unable to post bail. The institute also is involved in City of El Cenizo v. Texas, challenging a state law that goes in effect Sept. 1 and makes it a crime for law enforcement and other public agencies to adhere to sanctuary city policies.

Katyal, a former acting U.S. solicitor general, says in a prepared statement that the institute will help teach students about “constitutional design and structure, and will help reinforce the rule of law at a time when legislative oversight is often limited at all levels of our government.”

In the Hamdan case, more than 70 Georgetown law students over a period of seven semesters worked on nearly every aspect of the matter and it was mooted in the schools Supreme Court Institute.

McCord led the drafting of the amicus brief filed in Texas. It explains how bail reform has worked well around the country, using individualized risk assessments and imposing non-financial conditions.

Geltzer was asked by National Public Radio about suddenly switching from defending executive branch power to trying to rein in some of that power.

“There’s public service to be done by standing up for the Constitution right now,” he said. “There are lines that we worry about being crossed, that we think we see being crossed. And the fact that we have worked on these issues and, at times, tried to articulate where the line is from the other side gives us a real perspective and hopefully a credibility.”

McCord and Geltzer also will be visiting professors at the law school and will create a practicum course later in the school year.