How Long Can the Law School Bubble Last? 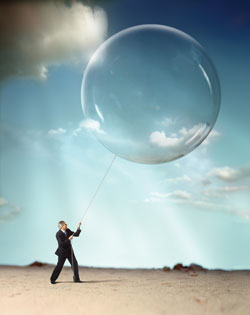 For Andrea, a past decision to ensure her future in law has left her in a stressed and distressful present. Concerned over how it might affect her job prospects, she would not allow use of her real name. And there is reason for concern: She’s been laid off twice since her 2009 law school graduation, including from a position where she earned $20 an hour at a small firm practicing as a licensed attorney. For the 29-year-old, who’s supported herself since college, the financial repercussions of law school may amount to the worst investment of her life, despite a degree from a second-tier school and a resumé that boasts a position on law review and coveted summer associate positions.

“I deferred my loans because of economic hardship the first time,” says Andrea, who borrowed nearly $110,000 to finance her education. “After that,” she falters, “they might be in forbearance … accruing interest … I just don’t know.”

Andrea’s situation is far from unique. In 2010, 85 percent of law graduates from ABA-accredited schools boasted an average debt load of $98,500, according to data collected from law schools by U.S. News & World Report. At 29 schools, that amount exceeded $120,000. In contrast, only 68 percent of those grads reported employment in positions that require a JD nine months after commencement. Less than 51 percent found employment in private law firms.

The influx of so many law school graduates—44,258 in 2010 alone, according to the ABA—into a declining job market creates serious repercussions that will reverberate for decades to come.

Click here to read the rest of “The Law School Bubble” from the January issue of the ABA Journal.