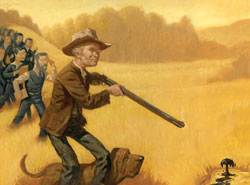 “Mud lawyers,” that’s what they called them—oil and gas attorneys, viewed for decades as second-class citizens in the world of corporate transactional law. They dealt in wet, smelly products pulled from the ground, relegated to practicing in Dallas and Houston, earning subpar rates compared to their brethren in the white-shoe firms in New York City. Other law firms branched out to start alternative energy practices that focused on solar, wind and geothermal.

Then a weird thing happened during the past few years. Like Jed Clampett “shootin’ at some food,” energy companies and financial investors rediscovered oil and natural gas.

The number of mergers, acquisitions, joint ventures and asset divestitures in the oil and gas sector—much of it involving investment in areas targeted for possible major oil or gas deposits in shale rock—doubled during the past five years, according to Mergermarket, an independent global M&A research firm affiliated with the Financial Times.

Almost weekly an upstream, downstream or midstream company is announcing another billion-dollar deal. Private equity firms from New York are pouring billions of dollars into the “Oil Patch” in hopes of hitting a gusher. International institutions such as Chinese- and Indian-owned energy companies have dumped billions into joint ventures with Texas-based oil and gas businesses.

“There’s a lot of money flowing into energy and Texas right now,” says Stephen Coats, a managing partner and general counsel at New York City-based Riverstone Holdings, a private equity firm with more than $22 billion in investments in the energy sector, including several billion in Texas.

And the pickings aren’t likely to be slim anytime soon. The International Energy Agency—formed by 28 member nations to research energy issues and respond to disruptions in the oil supply—predicts in its World Energy Outlook 2012 (PDF) that the U.S. will become the world’s top oil producer by the end of the decade, overtaking Saudi Arabia, and will be a net exporter of oil by 2030.

Click here to read the rest of “Texas Tea Time” from the February issue of the ABA Journal.

Previous:
Don't see stand-your-ground issues? Maybe you should ‘give up your bar card,’ DA says

Next:
Breaking the cycle of violence against women is a key to ending human trafficking, activists say