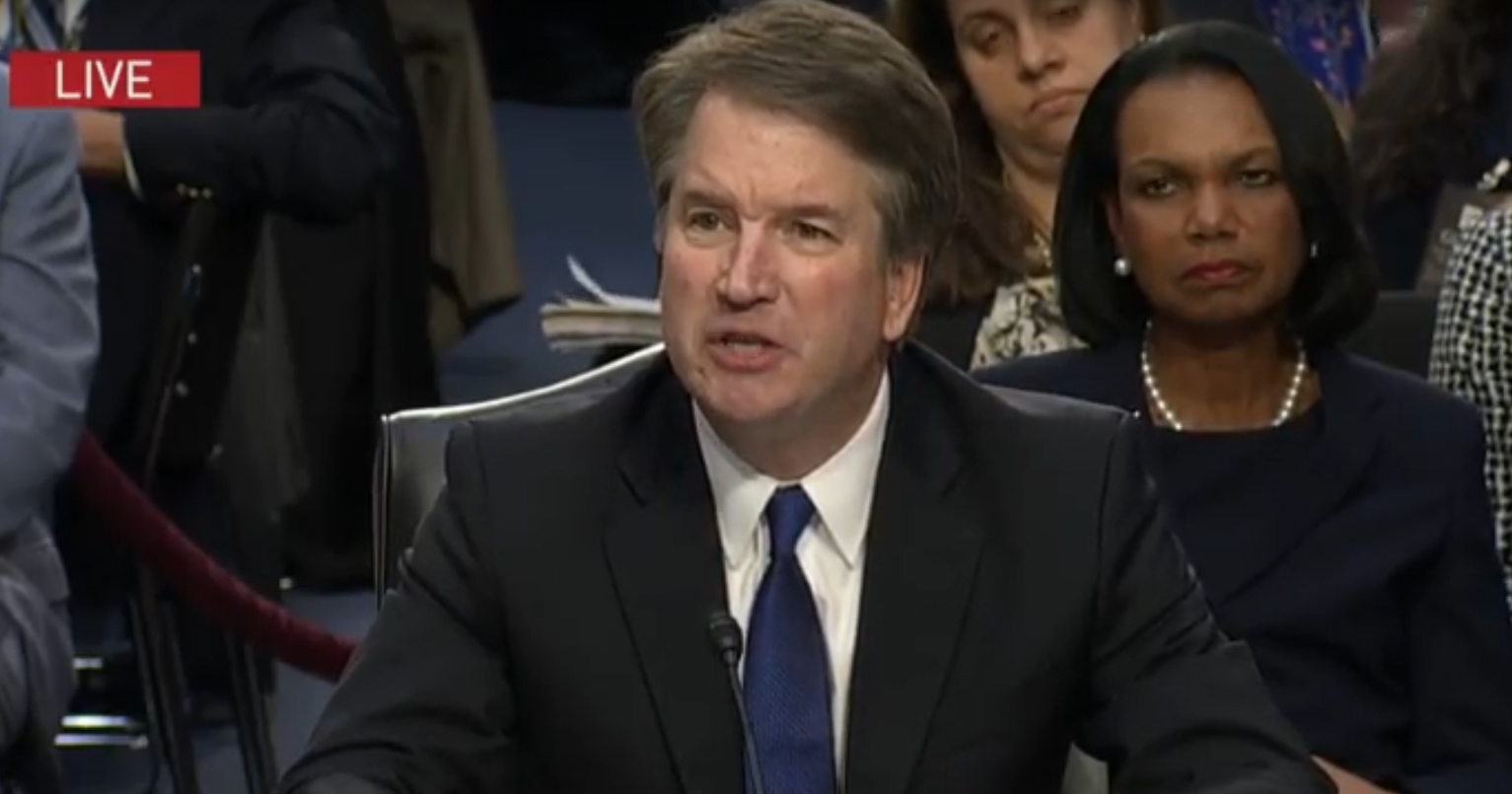 The judiciary committee voted 11-10 along party lines on Friday to advance Kavanaugh’s nomination to the Senate floor, but only after Sen. Jeff Flake, R-Ariz., crafted a one-week delay on the floor vote that would allow the FBI to investigate allegations against Kavanaugh by Ford and at least one other accuser.

“This country is being ripped apart here,” Flake said from the dais of the committee room. “I think we can have a short pause and make sure the FBI can investigate.”

At the hearing, Ford, a research psychologist and professor, detailed her account that Kavanaugh and a friend pushed her into a bedroom at a party in 1982 when both were high school students; got on top of her while both remained clothed; and sexually assaulted her.

“Brett groped me and tried to take off my clothes,” Ford said Thursday. “He had a hard time because he was very inebriated, and because I was wearing a one-piece bathing suit underneath my clothes. I believed he was going to rape me. I tried to yell for help. When I did, Brett put his hand over my mouth to stop me from yelling.”

Kavanaugh angrily denied the charges. “I’m not questioning that Dr. Ford may have been sexually assaulted by some person, in some place, at some time, but I have never done this to her or to anyone,” he said before the committee. “That’s not who I am. It is not who I was. I am innocent of this charge.”

Ford’s measured delivery of her statement and steady answers to questions from Rachel Mitchell, an Arizona sex crimes prosecutor tapped by committee Republicans to handle their side of the inquiry, convinced much of the nation of her credibility.

Her turn before the Senate committee was considered so powerful that even the White House was concerned.

But when Kavanaugh appeared at the witness table Thursday afternoon, he not only denied the allegations but lashed out at committee Democrats.

“This whole two-week effort has been a calculated and orchestrated political hit fueled with apparent pent-up anger about President Trump and the 2016 election, fear that has been unfairly stoked about my judicial record, revenge on behalf of the Clintons, and millions of dollars in money from outside left-wing opposition groups,” Kavanaugh said in his 45-minute opening statement. “This is a circus.”

By the end of the day, Democrats made it clear they believed Ford, while Republicans found a way to reconcile the competing accounts in favor of Kavanaugh.

“Obviously what happened in the hearing was very traumatic, but I’m not sure much changed,” says Ilya Somin, a professor at George Mason University’s Antonin Scalia Law School in Arlington, Virginia. “If you look around, there is a very high correlation between what people think about Kavanaugh before and after the hearing. It doesn’t appear to have changed many minds.”

The judiciary committee is a 21-member panel made up of Senate members who have been former prosecutors, defense lawyers, state attorneys general, judges, as well as non-lawyers. It has had trouble with the role of fact finder and surrogate trial court, says one veteran of the Clarence Thomas-Anita Hill case.

“Obviously what happened in the hearing was very traumatic, but I’m not sure much changed. If you look around, there is a very high correlation between what people think about Kavanaugh before and after the hearing. It doesn’t appear to have changed many minds.”
llya Somin, professor at George Mason University’s Antonin Scalia Law School, Arlington, Virginia

“The committee and the Senate have a really difficult time dealing with something like this,” says Dennis K. Burke, who was counsel for the Democrats on the judiciary committee during the 1991 hearings on the nomination of Thomas. Those hearings took up the sexual harassment allegations against Thomas by Hill, his former co-worker at two federal agencies.

“Regardless of whether there is anyone left on this planet who wants to defend this process, I don’t think anyone can say this won’t affect the Supreme Court,” says Burke, who is now of counsel to Ballard Spahr.

Naomi Mezey, a professor at Georgetown University Law Center and the co-director of the Georgetown Gender+ Justice Initiative, says that while committee Republicans strove to appear respectful of Ford, “respect is not just evinced but what you say, but by what you do.”

“I felt like this was a performance about patriarchy,” she says, referring both to Kavanaugh’s and the Republicans’ responses. “This is (about) very powerful men outraged because they had been challenged by women about sex.”

Ian Samuel, an associate law professor at Indiana University Bloomington Maurer School of Law and co-host of the First Mondays podcast about the Supreme Court, was among many who were struck by the partisan and angry tone of Kavanaugh’s appearance.

“The demeanor of Kavanaugh was vaguely shocking for the particular job he’s being considered for,” says Samuel, a progressive who was an ideological “counter” law clerk to Justice Scalia. “The temperament on display strikes me as quite apart from the allegations. It’s almost independently disqualifying.”

Sen. Christopher Coons, D-Del., who is credited with working with Flake to develop the plan for the one-week FBI investigation, told CBS’ 60 Minutes on Sunday night that Kavanaugh “was clearly belligerent, aggressive, angry.”

“There were some lines that he delivered that were sharper, more partisan—this is the Clintons paying me back, this is a Democratic smear campaign—that I was surprised, struck, to hear from a judicial nominee,” Coons said.

Flake, who appeared at Coons’ side in the same interview, said Kavanaugh deserved to be cut a little slack.

“It was anger,” Flake told correspondent Scott Pelley. “But if I were unjustly accused, that’s how I would feel as well. As it went on, I think his interaction with some of the members was a little too sharp. The statement at the beginning, I thought, was pretty raw, but in keeping with someone who had been unjustly accused.”

“The demeanor of Kavanaugh was vaguely shocking for the particular job he’s being considered for. The temperament on display strikes me as quite apart from the allegations. It’s almost independently disqualifying.”
Ian Samuel, associate law professor at Indiana University Bloomington Maurer School of Law

Sen. Lindsey Graham, the South Carolina Republican who spoke up angrily against the Democrats at Thursday’s hearing, told ABC’s This Week on Sunday that he supported Kavanaugh and it would take a “bombshell” from the FBI interviews to change his mind.

“I’m offended by the fact that anybody would hold it against Brett Kavanaugh to be upset by the way he was treated,” Graham told moderator George Stephanopoulos. “He’s had six FBI background checks. He’s been on the political stage for 26 years. He’s not a stumbling, bumbling drunk. … I think his life was ruined here. I’m going to vote for him unless some bombshell comes out that I don’t know about.”

Besides interviewing several people associated with Ford’s allegations, the FBI has reportedly contacted Deborah Ramirez, who alleges that Kavanaugh exposed himself to her while the two participated in a drinking game at a Yale University dormitory when they were undergraduates. Kavanaugh has denied her allegations.

There was some question on Sunday about whether the White House, which agreed to the one-week delay, had limited the scope of the inquiry. In a tweet late Saturday night, President Donald Trump called an NBC News report that he was limiting the investigation incorrect.

“Actually, I want them to interview whoever they deem appropriate, at their discretion,” Trump said on Twitter.

NBC News stands by its reporting.

The New York Times reports Monday afternoon that the White House says the FBI is authorized to interview anyone considered necessary in the inquiry, which still must be completed by the end of the week.

Asked if the FBI should question Kavanaugh, Trump said, “I think so. I think it’s fine if they do. That’s up to them,” the Times reports.

Adds final paragraphs at 1:38 p.m. with Trump saying the FBI can interview anyone.