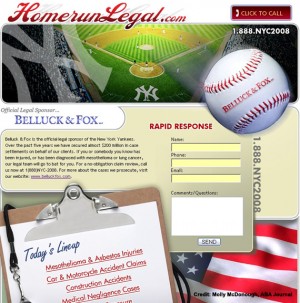 Screen shot before site was removed.

An athletic shoe company, a tire manufacturer, and even China’s largest dairy are sponsors of the New York Yankees. But a law firm?

The site featured a photo of Yankee Stadium, a baseball emblazoned with the firm’s name, and a clipboard listing “Today’s Lineup” with such power hitters as “Mesothelioma & Asbestos Injuries,” “Car and Motorcycle Accident Claims” and “Construction Accidents.” Festooned with the Yankees logo, it claimed the firm was the “official legal sponsor” of the Bronx Bombers.

“I don’t know them. I’ve never heard of them. But I am not looking to hurt them,” said Trost, who is himself a lawyer. The team does not sell sponsorships to professional service firms, he says.

Name partner Joseph Belluck says it was all a big misunderstanding.

The firm purchased advertising from WCBS Radio, which broadcasts Yankee games, that made it the official legal ID sponsor of the broadcasts, he says. That entitles the firm to have its name read when the station reminds listeners that “any rebroadcast, retransmission, or account of this game without the express written consent of Major League Baseball is prohibited.”

Belluck also claims that the station’s sales representatives suggested that the deal included additional benefits, including the use of certain Yankee trademarks on firm promotional materials. But not, apparently, a designation as the Yanks’ legal sponsor.

After the ABA Journal alerted the team to the firm’s purported sponsorship on Tuesday, Belluck says a “friendly conversation” with a Yankees official about the inappropriate use of trademarks ensued. The firm promptly took down the website, and removed references to being the team’s legal sponsor from BelluckFox.com. “We never had any intention of running afoul of the Yankees’ guidelines,” Belluck says.