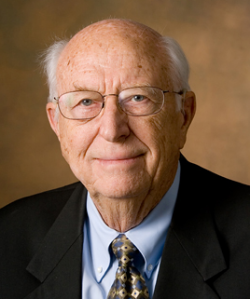 The ABA is poised to recognize William H. Gates Sr., who serves as co-chair of the Bill and Melinda Gates Foundation, with its highest honor, the ABA Medal.

Gates, who helped found what is now K&L Gates, is set to receive the award during the ABA’s policymaking House of Delegates meeting Aug. 3 in Chicago.

ABA President H. Thomas Wells Jr., in a release announcing the award, praised Gates for his years as a legal profession leader and for his pursuits—philanthropy and writing—after his retirement from the law.

“[Gates] is known as a ‘lawyer’s lawyer’ among his colleagues, a civic force in his native Seattle area and a benevolent friend to disadvantaged people around the world,” Wells said.

The ABA Medal is given to recognize distinguished service by a lawyer to the cause of American jurisprudence.

Gates, who was reared in Bremerton, Wash., attended public schools and was active in scouting. Before going to law school, Gates served in the U.S. Army in the Philippines and Japan during World War II. He earned his law degree from the University of Washington under the GI Bill.

In 1998, Gates retired from the firm he co-founded and helped grow, then known as Preston Gates & Ellis. During his 48 years of practice, Gates was an active bar leader, having served as president of the Washington State Bar Association and the National Conference of Bar Presidents.

At the ABA, he served for 13 years in the House of Delegates and was a member of the ABA Standing Committee on the Federal Judiciary.

Gates previously co-authored, with Chuck Collins, Wealth and Our Commonwealth: Why America Should Tax Accumulated Fortunes.