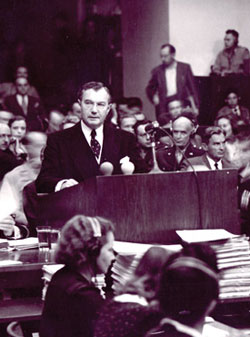 Associate Justice Robert H. Jackson was cussing mad when he wrote a letter to Secretary of the Army Kenneth Royall on Oct. 21, 1948. And it had nothing to do with the business of the Supreme Court. In two single-spaced pages, Jackson was detailing why the Army should OK the U.S. release of a documentary film it had made about the first Nuremberg trial, where Jackson had served as lead prosecutor. He had learned that the government denied the New York City Bar Association’s request to show the film.

Jackson described to Royall a profanity-laden letter he’d already sent to the city bar’s president, Harrison Tweed, decrying what he saw as a bone-headed decision. He said Tweed had asked whether the letter could be read to the group—minus the profanity.

“I told him he could read it if he would not cut out the profanity,” Jackson wrote Royall, underlining his displeasure. The film, Nuremberg: Its Lesson for Today, detailed the Nazi rise to power and the systematic atrocities committed by the regime. Jackson urged the Army to release the film, not only to the New York bar group but also “for showing by private enterprisers who might desire to exhibit it.”

Jackson’s interest in the film was obvious: He had taken leave from the Supreme Court in 1945-46 to head the American prosecution team at Nuremberg and became the architect of the international trial process. It was the first trial of its kind, levying justice rather than victors’ raw vengeance for 21 of the most important Nazi leaders. Still, his request was unavailing. Doing so, Roy all responded, would be “contrary to present policies and aims of the government.”

What Royall was saying was that Cold War exigencies had changed everything: A vanquished Germany was now an ally; the Soviet Union, once an ally, was now an antagonist. And the film rubbed against that new reality.

Jackson died in 1954. And although the film was widely screened in Germany in 1948 and 1949—to ensure the German public would know exactly what had happened under Nazi rule—it would languish in dusty vaults and movie canisters for decades, going virtually unseen in the U.S.

Bringing the film’s title to full irony, the New York bar group did see a version of it—a self-serving propaganda vehicle hurriedly created by the Soviets. Developed from stock trial footage and related films, it depicted the USSR as bringing the Nazi regime to justice in the course of single-handedly restoring world order.

But now, finally, Nuremberg: Its Lesson for Today can be viewed by Americans. The film has been meticulously restored by the late director Stuart Schulberg’s daughter, Sandra Schulberg, along with documentarian Josh Waletzky. They worked with an original copy provided by Germany’s official archives, and the new release is now showing worldwide.

Click to read the rest of “Harsh Lessons” in February’s ABA Journal.