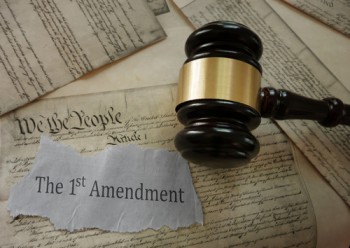 A churchgoer convicted of disorderly conduct for flipping the bird at his pastor was engaging in speech protected by the First Amendment, according to the Georgia Supreme Court.

The court reversed the conviction of David Justin Freeman in a decision on Monday, the Atlanta Journal-Constitution reports.

Freeman was convicted under a law that defines disorderly conduct as acting “in a violent or tumultuous manner” toward another person in a way that makes that person reasonably fear for his or her safety, according to the opinion (PDF).

The incident occurred in August 2014. Pastor Jason Berry of 12 Stones Church in Flowery Branch asked teachers in the congregation to stand so congregants could pray for a successful school year. Freeman also stood, stared angrily at the pastor, and raised his middle finger, causing the pastor to feel afraid. At the end of the prayer, the church service ended and Freeman began yelling about sending children to evil public schools where they would be raised by Satan.

Berry followed Freeman to the front lobby and said he should speak with him rather than shout during a church service. Freeman responded that Berry should be ashamed of himself and left the church.

The Georgia Supreme Court said that the disorderly conduct law is not unconstitutional on its face because it reaches only expressive conduct that amounts to fighting words or a true threat.