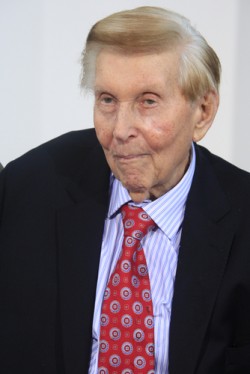 The gift from Redstone’s foundation is the largest charitable contribution ever to the law school in support of public service, according to a press release. The money will support students who work in public interest positions after graduation. The Hollywood Reporter also has a story.

Redstone, 90, is executive chairman of the boards at CBS Corp. and Viacom Inc. He previously gave $1 million to Harvard to establish 10 Redstone Fellowships in public interest work. “Now, thanks to Sumner’s transformational new gift,” said law dean Martha Minow in a press release, “we can look forward to even greater accomplishments from future generations of Redstone Fellows.”

Redstone’s foundation has also donated to another law school. It gave $18 million to Boston University’s School of Law in September 2012, THR says. The foundation also gave $10 million to the University of Southern California’s School of Cinematic Arts in January 2013.