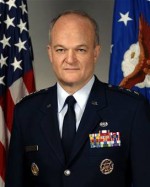 He was previously judge advocate general for the U.S. Air Force. In that role, he served as legal adviser to the secretary of the Air Force, oversaw an annual budget of $47 million and managed approximately 2,600 active-duty, reserve and civilian lawyers. During his tenure, he also reorganized the Pentagon’s delivery of legal services.

“Jack seems to have an exceptional talent in bringing people together; advocating for changes when necessary and standing up for core fundamentals on which this nation was formed,” says Lamm in the release.

“We determined that Jack Rives’ exemplary service as the judge advocate general of the Air Force—including his experience leading a global organization of legal professionals and advocating for effective, ethical solutions to issues of national and international importance—made him the perfect individual to lead the ABA to increase membership, improve member service and address the global focus of delivery of legal services,” Lamm says.

A graduate of the University of Georgia School of Law, Rives is admitted to the Georgia State Bar.