After a contested race, Refo selected as ABA president-elect nominee 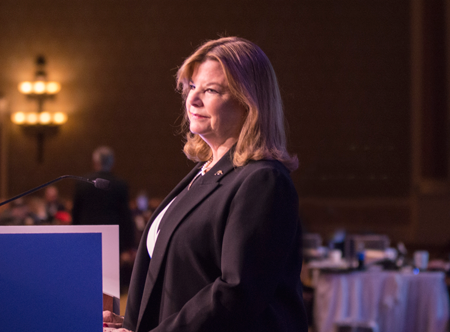 President-elect nominee Patricia Lee Refo addresses the ABA House of Delegates on Monday in Las Vegas, the day after being selected by the Nominating Committee. Photo by Mitch Higgins.

In a rare contested race, the ABA Nominating Committee voted Sunday to confirm Patricia Lee Refo of Phoenix as the next president-elect nominee.

“The strength of this extraordinary association is the breadth of the work that we do, and my goal is to continue the work of those who have come before me,” Refo told the ABA Journal after her nomination. “We will continue to work on the important things this association has always stood for—the independence of our profession and the independence of the judiciary, access to justice, and diversity and inclusion in our profession.”

Refo faced G. Nicholas Casey, a former ABA treasurer, of Charleston, West Virginia, in the race for president-elect. She is a partner at Snell & Wilmer, and she has served as chair of the House of Delegates and the Section of Litigation. She serves on the Arizona Supreme Court’s Advisory Committee on the Rules of Evidence, and she is a former member of the Advisory Committee on the Federal Rules of Evidence of the U.S. Judicial Conference.

Kevin Shepherd of Baltimore and Timothy Bouch of Charleston, South Carolina, also ran in a contested race for treasurer for the 2020-2023 term. The Nominating Committee selected Shepherd, chair of the Board of Governors’ Finance Committee, who will also face official election by the House of Delegates in August.

“I, working with others, want to put us on a path to fiscal stability and grow our membership and our resources,” Shepherd said after his nomination. “The ABA has a new membership model, and we’re working very hard on that to make sure it is executed and implemented efficiently. That will grow membership, and that is the bottom line, to grow membership.”

Shepherd is a partner at Venable, where he is managing director of finance and chair of the firm’s finance committee. He is a past chair of the ABA Section of Real Property, Trust and Estate Law and past chair of the Task Force on Gatekeeper Regulation and the Profession.

Attendees of the 2019 ABA Midyear Meeting may find that contested races are seemingly less rare as the Nominating Committee also hosted a forum for candidates vying for future nominations as secretary and chair of the House of Delegates.

Barbara J. Howard of Cincinnati will face Rew R. Goodenow of Reno, Nevada, for the nomination as chair of the ABA House of Delegates for the 2020-2022 term.

Ruthe Catolico Ashley and Pauline A. Weaver, both of California, will run for secretary for the 2020-2023 term.

Ashley serves as the executive director emeritus of California LAW and chairs the ABA Standing Committee on Public Education. She co-chaired the Women of Color Research Initiative Committee for the Commission on Women in the Profession and served as chair of the Council for Racial and Ethnic Diversity in the Educational Pipeline. She is also a past president of the National Asian Pacific American Bar Association.

Reginald M. Turner of Detroit, who is running unopposed for president-elect for the 2020-2021 term, also addressed the committee.

Turner is a member of Clark Hill and has served as chair of the ABA House of Delegates Rules & Calendar Committee, Committee on Issues of Concern to the Profession and Committee on Credentials and Admissions. He is also a past president of the National Bar Association and the State Bar of Michigan.

These candidates will be considered by the Nominating Committee at the 2020 ABA Midyear Meeting in Austin, Texas.