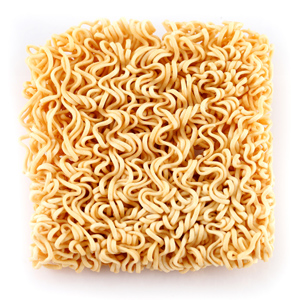 Prisoners are so unhappy with the quality and quantity of prison food that they have begun relying on ramen noodles as a form of money in the underground economy, according to a study of male inmates at a state-run prison.

The findings highlight “punitive frugality” of prisons, says study author Michael Gibson-Light, a doctoral candidate in the University of Arizona School of Sociology. The Washington Post covered his findings, released this week at a meeting of the American Sociological Association. A press release is here.

Gibson-Light tells the Post that the unidentified prison changed one of its three daily hot meals in the early 2000s to a cold sandwich and a small bag of chips; eliminated weekend lunches; and reduced portion sizes at every meal. Inmates told him the food was “inedible or too little to sustain them for a day.”

Gibson-Light says his findings focused on one prison, but other investigations also point to the ramen noodle trend. His study is an offshoot of year-long study of inmate laborers at the prison.

The Post also spoke with Gustavo “Goose” Alvarez, co-author of Prison Ramen: Recipes and Stories from Behind Bars. Ramen is “gold. It’s literally gold,” Alvarez said. “People will actually—and I hate to say this but—they’ll kill for it, believe it or not.”