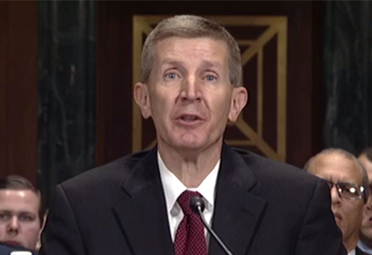 The Senate Judiciary Committee on Thursday advanced to the Senate 10 judicial nominees, including one for an appeals court who received a “not qualified” rating from the ABA Standing Committee on the Federal Judiciary.

The committee approved all the nominees an 11-9 party line vote, including Leonard Steven Grasz, who received the “not qualified” rating, the Hill reports. Grasz, a lawyer with Husch Blackwell in Omaha, Nebraska, was nominated to the St. Louis-based 8th U.S. Circuit Court of Appeals. The Omaha World-Herald and the Lincoln Journal Star also have stories.

The ABA’s standing committee has said its rating stemmed from concerns that Grasz could not set aside a “passionately held social agenda” to respect precedent, including Roe v. Wade.

Democrats on the committee complained about the fast pace of the confirmation process. Other nominees advanced to the Senate on Thursday included two nominees to the New Orleans-based 5th U.S. Circuit Court of Appeals, former Texas Solicitor General James Ho and Texas Supreme Court Justice Don Willett. The ABA rated Ho and Willett as “well qualified.”