Sessions denies meetings and talks with Russians, disagrees with some Comey details 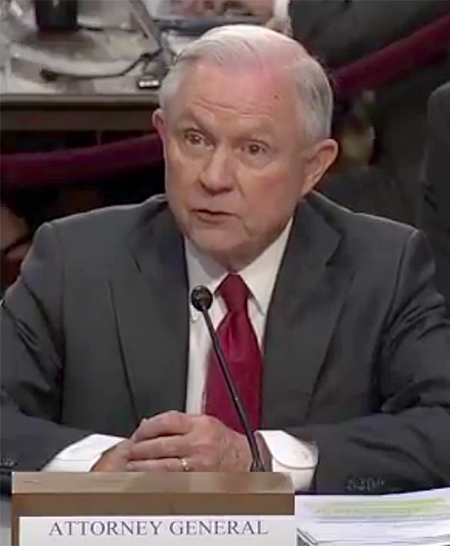 A screengrab of U.S. Attorney General Jeff Sessions on Tuesday.

Speaking under oath for roughly 2 1/2 hours during a hearing before the Senate Intelligence Committee on Tuesday, Attorney General Jeff Sessions denied having any substantive meetings or discussions with Russian officials outside of his duties as a senator while he was involved in President Donald Trump’s election campaign.

Sessions also repeatedly parried questions seeking information on some of his discussions with the president and disagreed with some details given to the same committee less than a week ago in testimony by former FBI director James Comey, also under oath.

Several Democrats on the committee repeatedly pressed Sessions to divulge details of some of his conversations with Trump, such as when the president was preparing to fire Comey. Sessions replied that it is “longstanding policy” in the Department of Justice not to do so.

Sessions made clear more than once that he was not claiming executive privilege for himself, but rather that he was protecting the president’s right, “if he chooses,” to later assert the privilege.

When he was accused by Sen. Ron Wyden, D-Ore., of stonewalling, Sessions disagreed and said, “I’m following historic policies of the Department of Justice. You don’t walk into any committee meeting and reveal confidential communications with the president of the United States.”

Sen. Kamala Harris, D-Calif., peppered Sessions with a series of questions in an attempt to get him to explain the DOJ policy itself, at one point asking, “Is it in writing?” Sessions replied “I think so,” and said he had discussed it with his staff.

“Did you not ask your staff to show you the policy that is the basis for your refusal?” Harris pressed on. Sessions replied that they had talked about it and about the principle of executive privilege.

There were no fireworks in the line of questions concerning Sessions’ meetings with Russian officials. Prior to his confirmation hearing in January, Sessions had not listed meetings with Russian ambassador Sergey Kislyak last July at the Republican convention in Cleveland, and again in September in then-Sen. Sessions’ office. The former Alabama senator subsequently said he had been advised by staff and in the FBI background check for his nomination not to list meetings with foreign officials that were part of his senatorial duties.

On Tuesday, Sessions was asked about a third meeting – or a possible meeting – with Kislyak in April 2016 at the Mayflower Hotel in Washington, D.C., reported by the Washington Post in early March.

Sessions said when that story broke – and again Tuesday – that he has no recollection of even seeing Kislyak at that gathering hosted by the Center for National Interest, which invited people engaged in foreign policy matters, journalists and several ambassadors. Sen. Tom Cotton, R-Ark., when questioning Sessions on Tuesday, read an email from the Center about the brief reception at the event featuring about two dozen guests and a receiving line. It stated that the arrangement meant conversations were brief and not private, and that it’s unlikely any meaningful conversation could occur without drawing attention.

That possibility of a meeting between Kislyak and Sessions at the Mayflower had taken on potentially new meaning last Thursday when Comey said there were a number of reasons Sessions had to recuse himself in the Russia investigation, but that he could only discuss the matter in a closed hearing. Some believed Comey was hinting that Sessions’ meeting with Russians was problematic and contributed to his recusal in the investigation. That didn’t pan out.

“I may have had an encounter” with Kislyak at the hotel, Sessions testified, though said he had no recollection of it and knows that Kislyak was there only because he has subsequently seen video of the ambassador entering the event.

Other questioning probed the differing recollections between Comey and Sessions over a February meeting in the Oval Office with the president and several others – including Sessions– when Trump asked all to leave the room except Comey. The former FBI director testified that the president spoke to him about the investigation of former National Security Advisor Michael Flynn, telling him “I hope you can let this go.”

Comey testified last week that he spoke with Sessions day after that meeting and told him he was not comfortable being alone with the president in that situation. Comey said Sessions said nothing, and that his body language indicated that there was nothing he could do about it.

The Justice Department subsequently issued a statement saying that Sessions had replied to Comey, telling him that the FBI and DOJ needed to heed policy in such matters. Sessions noted in his testimony Tuesday that Comey had previously been deputy attorney general.

Sessions said, “I think he’s incorrect,” and added that he felt Comey had been in the DOJ for so long that he “knew those policies probably a good deal better than I do.”

Sessions said his chief of staff was also in that conversation, and that Comey “mentioned no facts of any kind, didn’t mention that he’d been asked to do anything that was improper.”

Comey testified that he didn’t mention details to Sessions because he expected the attorney general would soon recuse himself from the investigation that includes a probe of Flynn.