Some People Love the Blawg 100 a Little Too Much 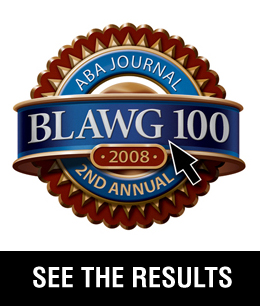 In early December, we launched the 2nd Annual ABA Journal Blawg 100 reader poll, inviting readers to select their favorite legal blogs in 10 categories from among the 100 best named by our editors. Each computer could vote for a given blog only once. Voting ended at midnight on Jan. 3.

Many of the top 100 blogs trumpeted the honor on their sites, soliciting votes from their readers in a good-natured competition to win their category. In doing so, they also helped expose their readers to the whole list, which includes some of the smartest, most sophisticated legal analysis on the Web today.

Some voters, unfortunately, looked for ways around the rules. But they didn’t factor in that they were dealing with journalists from Chicago, who know a thing or two about the “vote early and often” syndrome.

Because any online poll can be subject to subterfuge, we instituted a series of checks behind the scenes to make sure only legitimate votes were counted.

For a handful of blogs, multiple votes were cast from the same computer in quick succession. Some of those votes came from blog owners, but others were coming fast and furious from computers overseas that were apparently unconnected to the blogs for which they were voting. After voting closed on Jan. 2, we stripped those bogus votes out of the totals. The totals that now appear on each of the category pages include only votes that were legit.

This year, winners in each category get a free pass to ABA TechShow on April 2-4 in Chicago.

Congratulations to the winners in each category, as certified by your official Blawg 100 Board of Elections:

NEWS & POLITICS
Above the Law
ATL founder David Lat moved on and up to become managing editor of Breaking Media, the company that hosts ATL and other blogs. But the guy who saw BigLaw’s entertainment potential also saw opportunity in the search for his replacement: Elie Mystal got the job in an “ATL Idol” competition staged on the blog. The guard has changed, but ATL is still law-firm-rumor central, and Lat remains a regular contributor.

CRIME TIME
Defending People
Rather than using his blog to shake his fist at injustice everywhere, Mark Bennett focuses on how lawyers can make their own justice in the courtroom. He shares his philosophies through analogies and anecdotes from his Houston criminal defense practice.

LEGAL THEORY
Jonathan Turley
The George Washington University law professor keeps his posts short, light and entertaining while focusing on outrageous criminal justice and tort stories in the mainstream media (“bizarre” is this blog’s most populated topic). But be sure to click the “continue reading” links to get this constitutional scholar’s take on how these stories will end.

NICHE
Patently-O
We believe Patently-O’s claim that it’s the most popular patent law blog around. Author Dennis Crouch, a law professor at the University of Missouri, has developed a loyal community around summaries of key decisions or patent law cases of interest, as well as a job board and an event calendar. And last time we checked, Patently-O’s Facebook group had more than 800 members.

QUIRKY
BabyBarista
Fun from across the pond: An admittedly fictional diary of a junior barrister at the English bar. (Although this blog started in 2006, when BabyB was in pupillage.) It was a sensation from the start, and the London Times picked it up within months of its launch. It’s part soap opera and part snark from an author who’s cheesed off with the legal profession.

CAREERS/PRACTICE MANAGEMENT
Temporary Attorney
If you want to succeed in the legal business, you better hope you don’t get mentioned by the author of this blog, who goes by the name “helpme123.” The writer seeks to blow the whistle on “nasty sweatshops, swindling law schools and opportunistic staffing agencies,” especially if the victims are contract attorneys.

J.D.S IN TRAINING
Thank You Ma’am
Blogger Sharon Nichols, a University of Alabama law student, turned her posts on “political commentary and general frivolity” into a book deal. Her Facebook group, I Judge You When You Use Poor Grammar, led to a forthcoming book by the same name. Nichols has nearly abandoned political topics, but the grammar of her school’s e-mails to students give her plenty of post fodder.

E-LISTENING [it was a tie]
Lawyer2Lawyer
This high-quality podcast features timely topics and guests whose perspectives add context to legal affairs issues in the news. Podcasters J. Craig Williams of Newport Beach, Calif., and Robert Ambrogi keep the conversation going each week with insightful questions and commentary. And the catchy Lawyer2Lawyer theme brags that listening is “the most fun you can have while wearing a vest.”

LexisNexis Legal News & Litigation Report
You get a whole menu of daily law news options—general legal news, insurance law news, environmental law news or news from California and New York—from this high-end podcast. The news, read by various LexisNexis publication editors, is in a headline and summary format that’s easy to play while at your desk or to download by subscription for on-the-go listening.