Species may be called endangered based on projected climate change, 9th Circuit rules 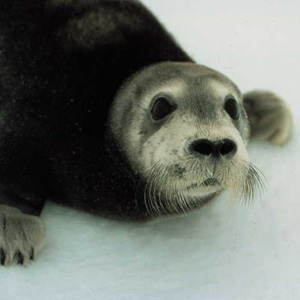 Image of a Pacific bearded seal from the National Oceanic and Atmospheric Administration.

Federal agencies may classify species as threatened based on projected habitat loss due to climate change, the 9th U.S. Circuit Court of Appeals ruled Monday.

The ruling came in a challenge to classification of Pacific bearded seals as threatened, according to the Los Angeles Times. The National Marine Fisheries Services had classified the seals as threatened because Arctic sea ice is disappearing over shallow waters. The three-judge panel of the 9th Circuit agreed that this will “almost certainly” threaten the seals’ survival over the next century.

The ruling (PDF) is a loss for energy companies, the state of Alaska and Alaska Native groups. The state and the energy companies opposed the listing because it would affect current and future offshore drilling. Alaska Natives who live near the coasts hunt seals for subsistence, according to Courthouse News. The groups had joined forces to argue that the government hadn’t shown that the loss of the ice would harm seals, as they had survived warming periods in the past.

But Judge Richard Paez, writing for the panel, said the agency does not need to wait until the habitat is actually destroyed to determine that losing habitat can lead to extinction. Several other species, including the polar bear, have also been classified as threatened because of climate change, and a lawyer for one of the environmental groups that requested the listing said it opens a path for more such classifications.

“This legal victory is likely to have major implications for many other climate-threatened species,” said Kristen Monsell, a staff attorney for the Center for Biological Diversity.

The court noted that all parties agree that sea ice will melt; they differ only on how much and how fast. Climate projections may not be set in stone, the court said, but the Endangered Species Act doesn’t require that research be ironclad; it requires only that the agency consider the most reliable data and acknowledge the limits of that data when making decisions.

An attorney for the state of Alaska told the Times it would consider an appeal. The CEO of the Alaska Oil and Gas Association, Kara Moriarty, said the same to the Alaska Dispatch News, contending that the rationale for the listing was “based on conjecture rather than science.”

The Pacific bearded seal lives on ice floes in shallow waters when it gives birth and raises pups, the Times says. The government’s models showed that ice floes could disappear during breeding seasons, forcing young seals onto shore where predators are more common and depriving all of the seals of some of the shallow-water species they eat.

Because the seals follow the ice pack north in summer and south in winter, more parts of Alaska may be classified as critical habitat because of this ruling, Courthouse News says.