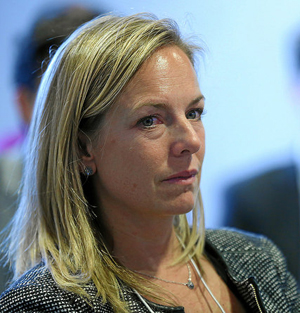 Nielsen was tapped to fill the position left vacant by Kelly in July when he replaced Reince Priebus as chief of staff. Politico, the Washington Post, USA Today, and Fox News all have coverage of her nomination.

Nielsen “has extensive professional experience in the areas of homeland security policy and strategy, cybersecurity, critical infrastructure, and emergency management,” the White House says in a statement. “She is the first nominee for this position to have previously worked within the Department of Homeland Security, having served there in two administrations, first as senior legislative policy director for Transportation and Security Administration under President George W. Bush and then as Department of Homeland Security Chief of Staff under President Trump.”

Nielsen holds degrees from the University of Virginia School of Law and the Georgetown School of Foreign Service.

One person with concerns about Nielsen’s nomination is Rep. Bennie Thompson of Mississippi, the top Democrat on the House Homeland Security Committee. He cited the Bush administration’s response to Hurricane Katrina in 2005, telling USA Today it was “botched,” and the reaction from Washington so far after Hurricanes Irma and Maria ravaged Puerto Rico and the U.S. Virgin Islands.

Others in the running for were homeland security adviser Tom Bossert and acting commissioner of U.S. Customs and Border Protection Ken McAleenan, the Post reports. Politico reports that House Homeland Security chairman Michael McCaul, a Republican from Texas, was also considered.