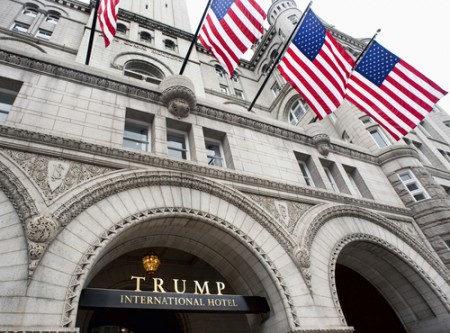 In January, a group of prominent attorneys and scholars sued President Donald Trump, alleging that his failure to divest his business interests puts him in violation of a constitutional rule against payments from foreign interests. On Tuesday, two more plaintiffs joined that lawsuit, the Washington Post and NPR reported.

The new plaintiffs are Restaurant Opportunities Centers United, a group that trains and advocates for restaurant workers, and Jill Phaneuf, who books events at two Washington, D.C. hotels. Phaneuf is joining the suit as an individual. They’re joining Citizens for Responsibility and Ethics in Washington, a group that includes prominent liberal legal scholars, including Harvard Law School professor Lawrence Tribe and University of California at Irvine Law School dean Erwin Chemerinsky. (Chemerinsky writes a monthly online column for the ABA Journal.)

The lawsuit alleges that Trump’s business ventures put him in violation of the Constitution’s emoluments clause, which forbids federal officials from taking “any present, emolument, office or title, of any kind whatever, from any king, prince or foreign state.” Because the Trump organization does business with foreign governments, the plaintiffs argue that the president was in violation of the emoluments clause as soon as he took office.

But some in the legal community had argued that CREW lacked standing, because none of the original plaintiffs could point to harm they had directly suffered because of the alleged constitutional violation. (Slate’s Jurisprudence column, for example, called it “an audacious gamble.”) Adding the new plaintiffs could help. Saru Jayaraman of Restaurant Opportunities Centers United told the Washington Post that she couldn’t cite a specific situation in which her members had lost business to a Trump property, but the potential was clear.

“It’s not a free market, or a free country, when foreign governments feel like they have to eat and patronize Trump hotels and restaurants because he’s the president of the United States,” Jayaraman said. “I mean, that’s why the emoluments clause was written.”

Phaneuf declined to comment when the Post asked her a similar question, but issued a written statement to NPR.

“This isn’t about politics; I’m a registered Republican,” she said in a statement to NPR. “I joined this lawsuit because the president is taking business away from me and others with unfair business practices that violate the Constitution.”

The plaintiffs are asking a federal judge in the Southern District of New York to order Trump to stop the constitutional violations, and issue financial records showing he has. Former Obama administration ethics lawyer Norm Eisen, also a member of CREW, told the New York Times in January that one aim of the case is to obtain Trump’s tax returns.