Those of us dozing in the Doe v. Reed line at half past 5 on Tuesday morning received a rude awakening from a homeless man ranting at us about the interrelation of President Nixon, G. Gordon Liddy, ax murderers, and Internet privacy.

“Just don’t call him Jay Jay—he hates that!” concluded the man, referring to Liddy, as I fumbled for my glasses. By the time I could see anything, however, he was gone.

The trouble with pulling overnights on First Street is that the natural sleep hours invariably fall between 3 and 6 in the morning—the primetime arrival hours for most other would-be SCOTUS spectators on blockbuster case days. So while bits of the man’s rant seeped into my half-conscious dreamscape, many others stood fresh-faced and wide-awake with this scene as their introduction to life on the Supreme Court sidewalk.

But those of us who had been sitting outside since sundown saw another side of the story.

Late Monday night, a woman with close-cropped hair wearing stained sweats and ramshackle shoes walked up and asked what our line was for. “It’s the general public line for tomorrow’s case,” we answered.

“The general republic line, huh?” she responded. “You need ID for this? I don’t have ID. I just have my birth certificate.”

“No ID necessary,” we said. “The court’s open to the general public.”

“I’d like to go see the U.S. Supreme Court. You gonna be here all night?” she asked.

We told her we would be. She then went on her way to Union Station, where she could seek shelter from the cold night air.

I started First One @ One First to explore the Roberts court’s sensitivity to its surrounding political climate. In addition to analyzing its docket, arguments, and decisions, I have sought to gauge public opinion about the court by interviewing those who care enough to line up and brave the cold before dawn for this term’s politically salient cases. 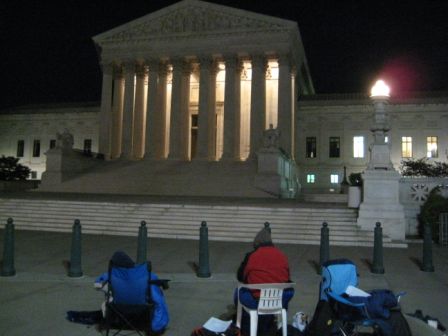 We make a big deal about sleeping on a sidewalk for a night. But for us, it’s a choice. The vast majority of those in line are lawyers and law students. Others are professionals whose work will be impacted by the case at hand. Our “hobo gear” consists of clean fleeces and jackets purchased at outdoors stores or gifted to us by family. And on the mall, around the Capitol grounds, and before the court, we are often the only ones sans shelter into the morning.

But the scene changes a few blocks north, a mile east, a westward bus ride downtown. Men and women huddle in their fifth-hand sleeping bags at the McPherson Square metro stop, just a few hundred yards from the White House. Up 16th Street NW, they sleep on benches in Meridian Hill Park overlooked by old society high-rises now populated with young professionals. If they’re lucky, they get a bed for a night in the shelter across the street from Georgetown Law.

The Doe line’s double-exposure—one man’s ranting conspiracy theories and one woman’s quietly asking questions—showed that even those who have abandoned or been abandoned by society seek to remain a part of our body politic.

As the sun came up and the police officer led our migration from the sidewalk to the plaza, there stood about 20 people back the woman from the previous night. She stood beside a tall, blond man wearing a suit, both staring in awe at the court and quietly discussing what we were all about to witness.

The few of us in line when she first walked by the night before cast sideways glances at each other when she heard “general republic” out of our “general public.” But as we exited the court on its last day of oral arguments for the term, we realized that she actually heard us right. Out on the Supreme Court’s sidewalk, where professionals play homeless and the voiceless prove their presence, the public line reflects our republic’s potential to foster empathy, opportunity, and oneness among its citizens, crazy and calm alike.