Washed Away: As Sea Levels Rise, Island Nations Look to the Law to Fend off Extinction 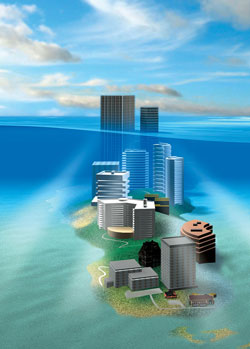 The Marshall Islands—two roughly parallel chains of low-lying coral atolls that stretch across 800 miles just north of the equator—have an intensely close relationship with the Pacific Ocean that surrounds them. The full implications of that relationship were apparent in a student’s question for John M. Silk, who was serving as minister of foreign affairs for the Republic of the Marshall Islands when he visited a local community college in early 2011.

“Has the government put in place a plan if we have to evacuate the Marshall Island citizens because the islands sink beneath the waves?” the student asked.

The answer was no, and it still is. “It never occurred to the government that we would like to put in place a plan like that as a contingency,” says Silk, interviewed before leaving office following the election of a new president in January. “We would basically be abandoning our country—losing our culture and identity. This is the last thing we want to do.”

The student’s question touched on what many consider to be a very real possibility. If climate change advances the way most scientists predict, the citizens of many of the world’s small island nations may face a catastrophe of mythic proportions sometime during this century. As sea levels creep upward, those islands—like the fabled lost city of Atlantis—will sink beneath the waves.

That prospect “is now knocking at our door whether we choose to hear or not,” Silk told the attendees at a conference convened in May 2011 to discuss the impact that rising sea levels caused by climate change could have on island nations around the world. The conference, held in New York City, was co-sponsored by the Republic of the Marshall Islands and the Center for Climate Change Law at Columbia University.

“Right now, sea level rise is a reality, but also a phenomenon that currently occurs in millimeters each year,” Silk added. “But the millimeters are turning into centimeters and there are inarguable risks of long-term sea level rise of a meter or more.”

Click here to read the rest of “Washed Away” from the March issue of the ABA Journal.