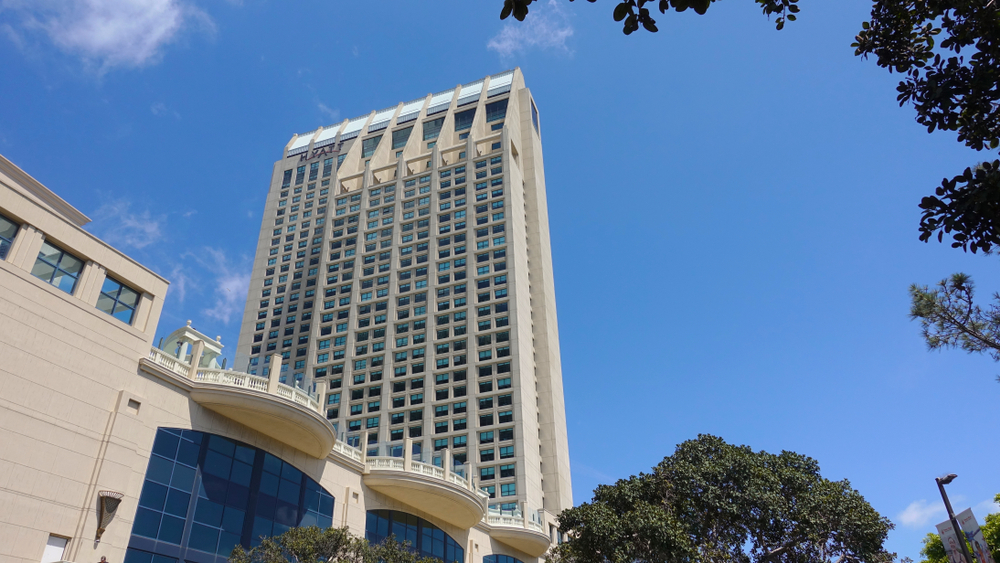 The Clio Cloud Conference will be at the Manchester Grand Hyatt San Diego. Image from Shutterstock.com.

A thriving law firm is one that is doing exceptionally well when measured by its own standards, says Clio CEO Jack Newton, not by how others would define success.

For some firms, strong performance could mean growing by dozens of lawyers, and for others it could mean staying the same size while enhancing the client experience.

Newton hopes this year’s Clio Cloud Conference in San Diego, which has “thrive” as its theme, helps legal professionals craft their own definitions of success and develop new ideas to achieve their goals.

“What we are aiming to deliver with the programming of the conference is a set of tools, a mindset, a community of people that will let all the attendees feel confident that they are well-equipped to truly thrive over the next year and beyond,” Newton tells the ABA Journal.

Newton will kick off the festivities with a keynote address—which will be livestreamed at 8:30 a.m. PT on Oct. 21—followed by the release of Clio’s annual Legal Trends Report.

According to Newton, not only will those first sessions provide insights about how lawyers can boost their productivity, but they will also identify ways attorneys can build client-centered law firms.

“We think if lawyers can improve their product market pitch and improve the amount of overlap between the way they are delivering legal services and the way consumers want to consume them, that actually unlocks a massive market opportunity for lawyers that can innovate in that dimension,” Newton says.

Some of the breakout sessions in the conference’s business law of track will explore those issues further. Other tracks will explore areas relating to legal technology and productivity, while users looking to better utilize Clio can take part in several company-sponsored sessions and workshops.

The conference will also feature an eclectic mix of guest speakers, including Pulitzer Prize-winning journalist Glenn Greenwald, who will address attendees on Clio Cloud’s first afternoon.

“Everything relating to privacy and electronic surveillance in the 21st century is something that is top of mind for lawyers today, and Glenn—thanks to his involvement in the Edward Snowden case and more broadly—has an unbelievable amount of access and insight into what that looks like on the world stage,” Newton says.

Bestselling author Daniel Pink, whose work includes When: The Scientific Secrets of Perfect Timing, will give a keynote Tuesday afternoon. He is expected to highlight how lawyers can make time their ally rather than an enemy.

Senghor’s best-selling memoir, Writing My Wrongs: Life, Death and Redemption in an American Prison, documents how he began to turn his life around during the years he spent behind bars for second-degree murder. Van Buren is co-founder of the Oakland, California-based Designing Justice + Designing Spaces, an architecture and real estate development nonprofit working to end mass incarceration by attacking its root causes.

Newton says Senghor and Van Buren will continue a discussion about the power of restorative justice that Bryan Stevenson, author and founder of the Equal Justice Initiative, started at last year’s Clio Cloud in New Orleans.

This year’s conference will also include the five finalists in the $100,000 Launch//Code conference pitching their innovations to judges who are industry experts. Newton will announce the winner of the “Best New Integration” title during the closing keynote.

For lawyers seeking a break from more serious legal discussions, there will be plenty of opportunities, including sunrise yoga and fitness boot camp sessions.

Clio Cloud’s combination of educational programming and extracurricular activities continues to be an attractive one for the legal community, as roughly 2,000 attendees are expected this year, up from 200 at the inaugural event in Chicago. The ABA Journal is one of the event’s media partners.

“It has really become the must-attend conference where everybody who is anybody in legal and legal innovation is attending,” Newton says.

Meanwhile, Clio heads into the conference thriving in its own right.

In September, the company announced a $250 million Series D funding round, one of the largest investments ever in a legal tech company.

“We really feel like we are opening up a new chapter in Clio’s growth story,” Newton says.